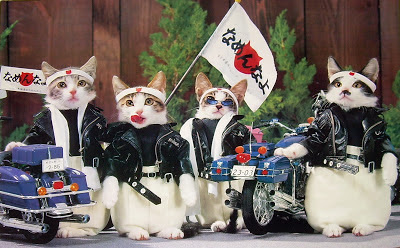 Sometimes I wonder what sort of cultural touchstones people shared before mass media allowed us to share common fads and trends. Did nostalgia before television, mass publishing, and radio come merely as a family thing or was there something other common experience which drew large and disparate numbers of people under the same emotional umbrella? I think we often take it for granted that others are going to understand our ability to have sentimentality for things like 80's cereal, 70's toys, or 90's music. Even if they don't share the same sense of nostalgia, they at least can relate to the feeling of having said feelings.

There must have been a time when people had such a small world that they didn't have this sense. Did they relate over the fact that they used to get oranges and walnuts for Christmas? Was there common sensibility over the changes in men's collars or women's hemlines? It's funny to think that our ability to reminisce over pop cultural elements is confined to the last century or even less. It's even stranger to think that we can have a worldwide connection to pop cultural elements that unifies us not only across the expanses of our own country, but across wildly different cultures. 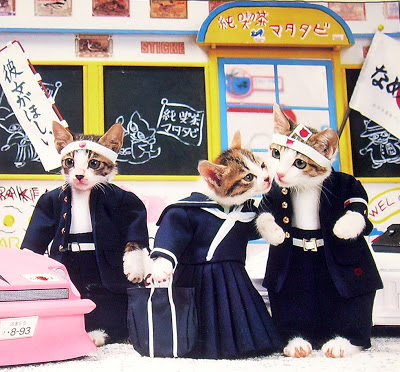 There are things in our stash of memories from the late 80's that my husband and I not only forgot about the existence of, but we are mystified as to their origins. One of those things is an enormous poster of cats dressed like people. While we can guess that my husband in the days when he was my boyfriend got that poster and carried it home in 1989, we don't know if he bought it, was given it at a shop (as freebies were often given at record and book stores as promotional items) or if it was a gift from a student. We only know that it was a pleasant surprise that we as cat lovers rediscovered when we went through long-stored items.

I didn't know this, but learned from a Japanese friend that these cats are called "Nameneko" and they were very popular in the 80's. This same friend said that seeing the pictures that I posted of them on Facebook (the same ones I'm using here) made her feel "natsukashii" (sentimental) because she collected many "goods" (items with their likeness like notebooks, toys, etc.) when she was younger. She pointed me at a web site which explains their origins in English as well as the Japanese site. 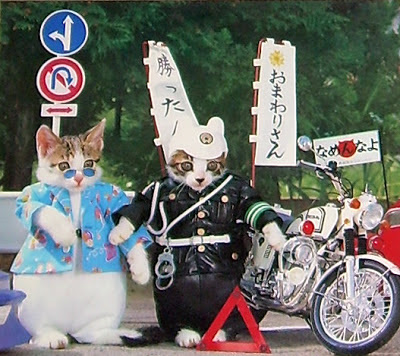 I wasn't paying much attention to cute cat stuff in the 80's, but apparently these cats in their human garb were big in the U.S., too. While I was spending my money on KISS posters and albums and pining for my boyfriend half a world away, 8 million posters of these cats along with books and trading cards were sold in America where they were known as "Perlorian". I'm sure I saw them, but I don't remember them. The fad in the U.S. was much smaller than the one in Japan, but clearly they struck a bit of a chord long before "LOLCats" or "Grumpy Cat" made their way in the world.

Learning that these cats were popular in the U.S. as well as Japan is what got me thinking about pop cultural touchstones and how the world has become a much smaller place indeed. I'm not sure if the fact that our cultures' trivial interests appeal to those from other cultures reflects our boundless desire for novelty, or if it touches on our deeper shared connections as humans who enjoy roughly the same things. Maybe it really goes no deeper than the fact that we all just love to anthropomorphize cats. ;-)