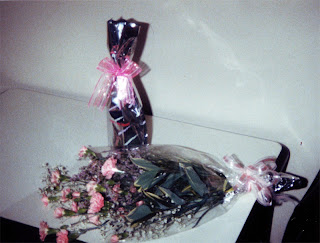 My first experience with Japanese gift-giving was a very confusing one in 1988 when I visited my future husband. At that time, I didn't know about the way in which gifts are used to build, cement, or verify relationships. In fact, I can't say now that I understand all of the nuances involved in the custom, and I'm not sure I ever will.

When I went to Tokyo in 1988 to spend a month-long vacation there, I visited my boyfriend at the school at which he was working. In fact, I spend a bit too much time there because he had a lot of down time (no classes scheduled because it was a relatively new school) and told me that it was okay if I hung out with him when he wasn't busy. It turned out that it was something he concluded logically, but that he didn't actually ask his Japanese superiors about.

Even if he wasn't busy, he was supposed to pretend he was. He spent about 8 months spending the times during which he wasn't busy listening to me talk on tape, writing me letters, listening to the Far East Network (the only English radio he could get), reading books or magazines, etc., but he couldn't do something which flaunted that fact that he wasn't working like having me sit there and talk to him.

On the bright side for the school, I was willing to actually take part in a class at the request of one of my boyfriend's students. For some reason, she wanted to ask me questions and I obliged. I know now that I was a "free bonus" to her, two teachers for the price of one. I also know that what we did was horribly inappropriate behavior for that particular job. At some schools, no work means no pay so you can do anything you want during unscheduled hours, but he was salaried at that time which meant they owned him during the hours he was supposed to be working. Yes, we were immature and culturally clueless and screwed up. At the time, it shocked us that they rather tersely told him to not have me there anymore, but now we know better.

At the end of the week in which this uncomfortable confrontation occurred, I met him at the school at the end of the working day. A group of his students wanted to take us both out for dinner at an izakaya (Japanese pub) nearby. Though I felt pretty awkward returning to "the scene of the crime", I knew that there was nothing wrong with my meeting him there after work to be escorted to the place with the students who wanted to take us out. 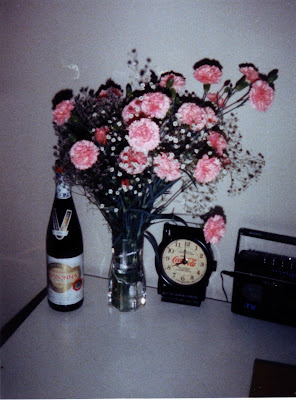 Before we left, something very weird happened. The school staff gave me a bottle of wine and a bouquet of carnations. They didn't know me and I had no relationship with them aside from being the cause of forcing them to have an unpleasant exchange with a teacher. It was shocked and confused at this display of generosity and the accompanying smiles. I awkwardly thanked them, and we went off to dinner at which  my boyfriend's student gave him a clock that looked like a watch with the words "Coca-Cola" on it.

After dinner, which I remember mainly as being loud and full of difficult exchanges with people of wildly varying levels of English competence and plates of weird food, my boyfriend and I went back to his apartment and tried to puzzle out what the gift-giving was all about. We thought it might have been an apology for asking me not to come anymore, but we never did understand why I was given these items. 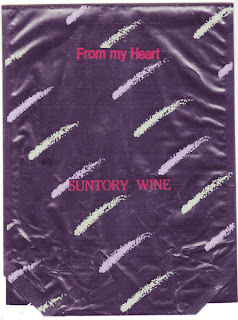 After having lived in Japan for a long time, I think that I know to some extent the answer to the question of why they gave the gift. I think it was a combination of letting my future husband know that there were no hard feelings toward me for violating their office rules and etiquette, but also simply because that is what Japanese people do.

Sometimes things happen because it is the rule, not because there is a deep and meaningful reason forming in the hearts of people who are performing the action. For instance, Japanese people bow instead of shaking hands, but the reason that they chose this sort of greeting is often not understood by those who perform it. If you ask them why, they may say it's about not touching each other and exchanging germs like hand shakes do. Many of them may not know the real reason or history. They just do it without thinking (much as many Western folks may shake hands without knowing the history of that gesture).

I'm not sure what happened to the wine that we were given. I don't drink any alcohol, and my husband didn't at that time. The flowers wilted and faded to dust. The clock was left behind for the next person who occupied the apartment my husband had been occupying. The memories though live on in the pictures of the gifts I took, the lessons I learned, and the stories that I tell. That is where the true value of gift-giving lies.
Posted by Orchid64 at 8:00 AM