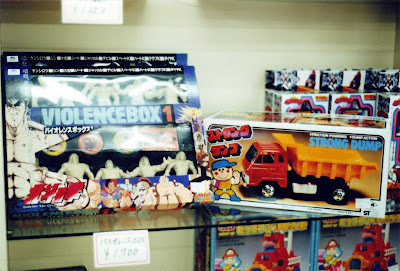 When my husband headed off to fulfill his one-year-teaching-contract, and we embarked on a long-distance relationship separated by thousands of miles, neither of us knew what he would be seeing aside from perhaps some cool music collectibles. He didn't know about all of the weirdness in terms of the language because the internet hadn't yet been invented by Al Gore. Sites like Engrish.com weren't around to aggregate the experiences such that anyone could access the hilarity that ensues when non-native speakers attempt to communicate in English.

At that time, he found me a lot of funny T-shirts. One of the cool things (besides the funky English) was when you found something that just happened to have meaning for life here and somehow existed there. Rather cryptically, he also found a shirt which had nothing more than the words "T.L. Connection" written on it at a time when I was working for a non-profit social service organization that was called "T.L." (short for Transitional Living, a place that no longer exists). I also found, coincidentally, a business named "Sharon" in the last year we were in Japan. Sharon is my sister's name.

One thing that we both realized as time went by was that the English that was cropping up wasn't nearly as butchered as it once was. No, we didn't think it was being proofread. I think, in general, that having things like Google's translation algorithm as well as better technology in electronic dictionaries has made it easier for people to get it right. There is also the chance that people just copy better English now than before because they have a much broader world to find and copy text from.

Frankly, it was a lot more fun when the world was smaller and Japan was more isolated. The picture above is from a toy store in 1988. There aren't even as many toy stores around in the 2000's, let alone any that sell "Strong Dumps" or "Violence Boxes". Of course, while it was funnier back then on a micro level, life as a foreigner on a macro level got a lot easier once we all grew into bosom buddies via the worldwide exchange of bits and bytes. Communication back home got faster, easier, and more intimate. Access to pop culture was expanded. Still, there was an essential quality to life in Japan in those days. It was isolating, but not terribly isolated in a way that is unlikely to ever happen again.
Posted by Orchid64 at 8:00 AM