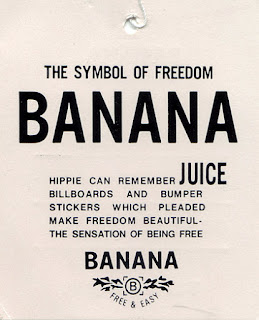 One of the only good things about having had a boyfriend in Japan while I suffered the difficulties of a long distance relationship was that the gifts were awesome. More than one of my female friends expressed envy and outright jealousy at what they saw as the opportunity afforded me by his location, especially in regards to KISS collectibles.The funny thing was that I was less interested in the KISS items than I was in Japanese stuff, including robes and those oh-so-well-known T-shirts with funny sayings. That is not to say that I didn't love the KISS junk that I got. In fact, I had the best collection ever because my boyfriend could only show his love with cassettes of him talking, written correspondence and gifts. One of the easiest options in terms of gifts was those collectibles.

For my first birthday, my future husband gave me a shirt which said "lusty members club" (among other things). That wasn't the last shirt that I got, and many of those early shirts are ones that we still quote to this day. One of our favorites had the line, "beat his monkey ass until it ain't no fun." Another, less obvious one was, "Use Venus Soap, It Saves Rubbing." My future husband said that we never used said soap because the rubbing was the funnest part. That's the sort of talk that made me fall in love with him. 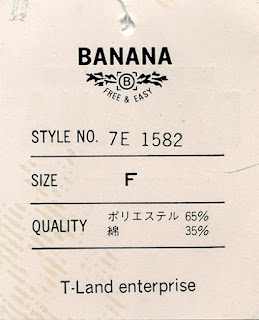 At the top of this post is a tag from one of the funny shirts my then-boyfriend sent me. The tags were as good as the shirts. The back of the tag, just above this paragraph, shows the size as "F". That's as in "free" size. I'm not sure what size "free" was, but I guess it was supposed to fit nearly any Japanese physique. I didn't see any shirts using this sizing system near the end of my time in Japan, which may mean I didn't look hard enough or they had changed over to the S, M, L, and LL system which seems more common these days.

The odd thing about the "Engrish" shirts is that they got a lot less funny as time went on. There were fewer of them, and they were less nonsensical. I'm not sure why that should be. Maybe I just didn't go to the right stores as I got older, or maybe the English in Japan really did get better. At any rate, I do have fond memories of those shirts, and wish I hadn't worn them all until they completely fell apart.
Posted by Orchid64 at 8:00 AM