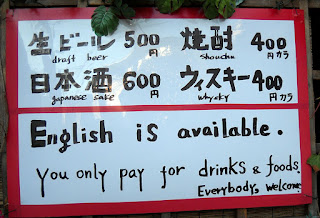 Wrong numbers are a fact of life in any country. The main difference between getting a call from someone who is confused or dials incorrectly in Japan as compared to the U.S. is that, if you answer in English, and I always did because that was the language I expected my callers to speak, you will more often than not be immediately hung up on. This isn't just because you are speaking English as salespeople (and NTT, damn their souls to a purgatory in which someone tries to sell them something they want and then never follows through, is the worst) will start blabbing on in Japanese even if you have the audacity to say "hello". It is because people think it is okay to be rude to foreigners or because they are so shocked that they panic and slam the phone down (perhaps they fear gaijin cooties being transmitted through the phone lines). Seriously though, I got very tired of people who mistakenly called me and didn't have the courtesy to say, "I'm sorry" (gomennasai/ ごめんなさい) or "I made a mistake" (shitsurei shimashita/失礼しました｡) before disconnecting. The worst ones would not only call and hang up on me, but then they'd do it again with the same mistaken number and hang up once more without a word.

I won't miss wrong callers simply hanging up on me without so much as an "I'm sorry."
Posted by Orchid64 at 8:00 AM