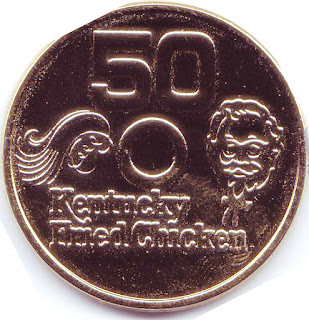 The scanner really picks up the tiny bits of dust embedded in the grooves. What looks so dirty and dull here looks very shiny, gold and clean in person.

One of the things which is clear from my memory books from 1988-89 is that Japan was a different place at that time. The positive effects of the economic bubble were still intact and a lot of things were more elaborate than they were after it burst. The item above is a reflection of good times. This is a plastic gold coin which was given away by Kentucky Fried Chicken. I believe you could have figured out who issued it without my saying that. 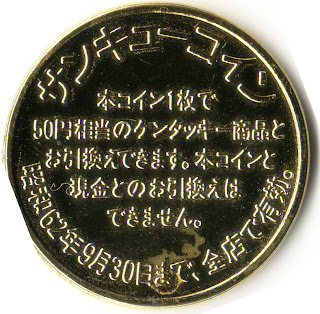 The "50" on it does not refer to the number of years they've been in business in Japan. This is supposed to emulate the Japanese 50-yen coin and this could be used to get 50 yen off of your meal at the shops. It's called a "thank you coin" and the date of issue is written on the back as 9-3-62. I wonder if people who don't know about Japanese calendars may misinterpret the date on it as September 3, 1962 and wonder if that is the year KFC started in Japan (they actually started in 1970 in Kobe). This date corresponds to the 62nd year of the Showa Emperor, which is 1987 by the Roman calendar that we use. That nearly pinpoints when my future husband obtained this little bit of memorabilia.

I wonder if one took this to a KFC in Tokyo and offered it over if they'd take 50 yen off your purchase as there is no expiration date on the coin (see comments - the date given is the expiration!). That being said, I wouldn't want to give it up. While it may be worthless, it is likely the last time KFC Japan would squander money on such a discount token. These days, they'd simply offer paper coupons or internet coupons rather than spend so much these types of things. It's not only a cool way to play "heads or tails", but a memento of better economic days.
Posted by Orchid64 at 8:00 AM