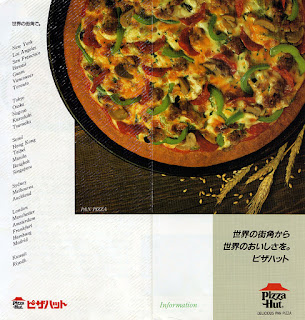 Click this smaller image to load a bigger version.

I'm not sure, but outside of die-hard hoarders, I'm probably the only person on the planet with 24-year-old flyers from fast food places. It is a testimonial to my sense in 1987 that anything with Japanese writing on it was "neat" and therefore worth keeping. Well, it's also a reflection of the fact that anything my future husband sent me was something to be treasured and added to my enormous scrapbooks.

This Pizza Hut flyer lists a host of cities on the left to make it clear what an international business Pizza Hut is. I'm sure that they meant it as a reflection of their sophistication, much as major department stores list their branches in London, Paris, New York, and, of course, Tokyo. It comes across as a bit strange because it's not like fast food outlets aren't located in every major city. McDonald's could do a bang-up ad listing all of the major cities it appears in. Actually, they'd have to publish one the size of a phone book to cover all of their bases.

It seems clear from this flyer that Pizza Hut was positioning itself as a more elegant pizza option as compared to the other dregs like Pizza-la, Domino's, and Shakey's. The stalks and grains of wheat in the picture also seem to be saying, "natural" or "wholesome". This marketing was done well before KFC bought out Pizza Hut and the look and feel of the place was rather different than it is now.

I've read that Pizza Hut started in Japan in 1973, but when my boyfriend sent me this flyer, it was not a common eatery in Tokyo. He was delighted to find one, but I don't think he ate there more than once because it was rather expensive. At present, the situation for Pizza Hut has changed because there are no sit-down restaurants for it in Tokyo. In 1987, there must have been at least one that you could go to and eat in as the flyer mentions a salad bar. I'm not sure at what point they vanished, but all of the Pizza Huts in Tokyo are now delivery or pick-up only. I guess that means their attempt to establish themselves as an elegant international eatery must have failed.