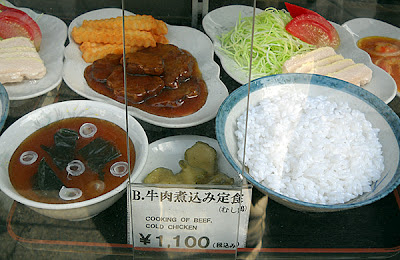 Since coming to America, my husband has refused to eat soup with a spoon. This is the result of having been "spoiled" by the Japanese custom of conveniently tipping the bowl up to ones mouth and taking a slurp. Though I have no problem at all with his doing this at home, I feel a little strange about the possibility of doing it in public. I'm going to blame the Europeans for creating nonsensical rules about soup rather than following the more pragmatic way of the Japanese (and likely other parts of Asia). As someone who is actually better with chopsticks than a spoon (I often manage to spill things on my shirt), it would save me a few stains to just up-end the bowl.

The Japanese way of drinking soup from the bowl rather than precariously ladling it up to our mouths with a spoon makes a good deal of sense, and I'll miss living in a culture in which this is considered correct manners.
Posted by Orchid64 at 8:00 AM