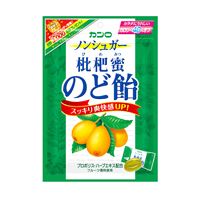 The notions of too much or too little of anything are culturally relative. In Japan, they always served me too much rice by my estimations. They gave me too little protein. The medicine was too weak and the coffee was often like tar. Before undies are wadded at that coffee comment, I should say that I like strong coffee like Italian espresso, but what passed for strong coffee in Japan tasted like the stuff at the bottom of a diner pot after it had been sitting on the hot plate all day.

Given my recent post about medicine being too weak for my gaijin physique, it may come as a surprise that some "medicine" was actually stronger in Japan than it seems to be in the U.S. That is what the Japanese call "nodo ame" (のど飴) and what we might call "throat lozenges or drops". As a teacher who taught in air conditioned settings very often, I frequently needed a little relief and my "go to" option in Japan was Kanro's sugar-free lozenges (pictured above). There were a plethora of really obnoxious tasting herbal cough drops in Japan and it took me awhile to get used to them, but they were very effective. Upon returning home, I've found that nothing comes close to these. What is more, the drops are individually wrapped in sealed packages and don't get gummy and sticky over time. I've found that the twist wrappers on American drops (or just loosely-packed ones) absorb moisture and get icky surprisingly quickly.

It's a small thing, but I really miss the Japanese herbal cough drops and how effective and well-packaged they were.

As an added note, I've found the closest thing to the Japanese ones that I have found are Ricola original drops. They're not quite as good, but still better than most American stuff.