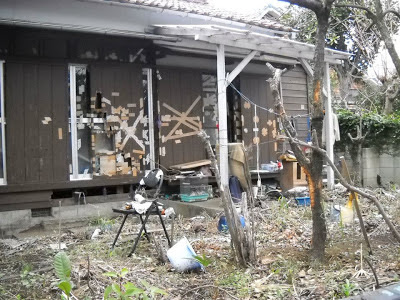 Yes, this is a real place in Tokyo (in Hamadayama). I don't know what it was all about, but the elaborate garbage placement nearly made it a work of art.

I have a real ambivalence about the way things worked in Tokyo in terms of the constant renewal and the waste associated with it versus the pristine sense of things being clean and new. Since coming back to America, I have been struck by how profoundly grubby things seem at times, even when they are actually technically "clean". Stores, even large, modern ones, in particular can sometimes shock me with the wear and tear on their structures which make them appear rundown. In Tokyo, customers generally felt uncomfortable with any sort of visible wear such as cracks, chips in paint, age-based yellowing. Anything that resembled age-related loss of quality was generally kept to a bare minimum. Most things felt pretty fresh and relatively new, if not actually "new". It didn't hurt that cleaning was done thoroughly, not simply "regularly".

All of that being said, I couldn't help but believe that it was immensely wasteful to refurbish or replace things simply because they were worn in appearance yet did not have diminished utility. In this day and age of concern about resources and the environment, it felt like an immense indulgence to a particular aesthetic to be replacing things that were perfectly functional, but superficially somewhat unpleasant.

My students used to tell me that they didn't like certain things like their old clothes, bags, or apartments because they were "dirty", but what they almost always meant was that they looked worn or used. I won't miss the waste associated with this mentality.
Posted by Orchid64 at 8:00 AM