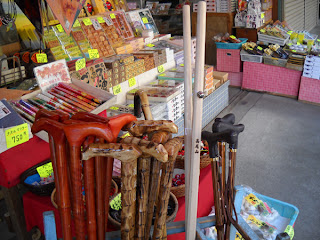 Upon first glance at this picture, what is it that you told yourself the objects in the foreground were? Did you think "canes" and imagine they were for disabled people to assist in walking? Or, did you think "walking sticks" to help people climb mountains? If you pay attention (or can read the Japanese), you can see which one is correct, but it's easy not to know which is the case at first glance.

Imagine that there is a large room-sized box with a large object in the middle that occupies about 1/3 of the capacity of the room. The object is an enormous and intricate work of art. If you were allowed to enter that room, you'd have to walk around it, get close to it, and even get on a step ladder to see all of it. Even then, the intricacy of the object means that you'd need to attend carefully to the small details and stand very near to it to get a sense of it as well as stand farther back than the room size permits to get a sense of the entirety of it. As it is, you aren't even allowed in the room. You are allowed to stand in one spot and view it through a small hole outside of the box.

As you might imagine, from such a limited perspective, you aren't going to be able to see much of the object. You'll miss details because you can't get as close as you would like. Entire sections of it will be outside of your ability to view them. If you are very lucky, you'll gain access to some of the other peepholes that allow you to see from other vantage points, but you'll never even be able to look through them all, let alone get into the room and be allowed to closely inspect the object.

This introduction is a metaphor for life. We all view it from our own particular perspective. The difficult part is not necessarily finding other perspectives to view things from. It's discovering that they other perspectives even exist at all and understanding that they are equally valid to our own. They aren't failing to see the truth from their vantage points. They are simply seeing things in a way that you do not. This is part of what I was getting at in my post on conjoint and disjoint agency. It is possible for two people to view the same thing and reach very different conclusions.

One of the many great things about having lived abroad for so long was that I heard a lot of perspectives from people who saw the world from vantage points that I was up to that point incapable of occupying. That's because it had never occurred to me that such a perspective existed until someone had shared it with me. This included, but certainly was not limited to, things like how marriage based on mutual self-interest rather than romantic love could be a positive thing in some societies and for some people. After a lifetime of consuming Euro-centric culture in which princesses were betrothed to men they despised because of their wealth and title and only achieved a happy ending after slipping the arranged-marriage-bonds and marrying the poor but characterologically superior man of their dreams, I found it hard to see business-based bonding as anything but a path to misery. There is plenty of misery to go around in relationships that go sour, even those that start off with passionate love.

There is a new tourism ad for Japan that a friend recently mentioned (on Facebook) that he liked. You can watch it before reading what I have to say if the embedded video works (Note: I realize the embedded video was a much shorter version of the one that I actually saw and not the one I'm referring to in this post so I have removed it. Please view the full version here. It's a nice enough ad, though clearly misleading about what it's really like in Japan. There's a heavy focus on cultural events and awa dancing in particular. These types of cultural activities are rare, and few Japanese people actually take part in them, but that's not really a criticism so much as a recognition of the fact that none of these types of ads (for any country) are accurate reflections of the tourist experience or the people of a country. It's actually a good choice from a marketing perspective since it is something which is little known, engaged in by a small number but a wide variety of people from diverse backgrounds (not just specialists), is fairly uniquely Japanese, and is dynamic. It makes for good video.

Of course, there is much more than just the dancing in the 6-minute-plus clip. There are also temples, zen gardens, shopping, geisha, drinking in izakaya, sushi consumption, etc. It's a fairly decent cross section, albeit only showing the most appealing and sanitized versions of all of these things. Japan is a pretty clean country, but many of these experiences aren't nearly as pristine-looking as what you see in the video. Again, that is not a criticism. You lure customers by showing only the best part of your product. They don't need to be shown the frays at the edges of the tatami mats or the architecturally less appealing areas of the ryokan (Japanese inn). Every country shows the best they can in these types of ads.

I don't know what my friend saw that he particularly liked about the ad. I'm guessing it's the emphasis on the what appear to be real and fairly average people, and a fine one it is as well. That's a peephole view from a particular perspective on this bit of advertising art, and it's a valid one. Of course, there are other peepholes which we're not given access to. Those are the ones in which you're crammed like a sardine on a crowded train and getting gawked at because you're not Japanese or where you're lost and can't read anything or ask questions because you're a tourist armed with a phrasebook full of sentences you can't even pronounce properly, let alone understand the replies you're receiving.

That isn't even really what I have to say. Both perspectives of the pretty and the less pretty Japan are real and valid. There are a lot of great and interesting things to see and do in Japan as a tourist. In fact, I'd recommend anyone who can visit there do so. You'll love it, and the people will seem very polite and wonderful all or most of the time. The peephole into Japanese culture from the tourist perspective is the best vantage point you can have. It's a limited one for sure, but that doesn't make it less "valid" as the view from that perspective. It is the most pleasant-looking one, and there's no reason not to enjoy it. Tourists stay in tourist places and have tourist experiences. They deal almost exclusively with people who are paid to make them happy while the country at large isn't. You really are a "guest" when you're in the tourist experience.

Once again, my issue with this video isn't with the perspective that it shows a limited, carefully crafted and edited and calculated view of Japan. That's really about doing the job right and well. My problem with the video is that it is incredibly sexist.

What? You didn't view the video through that peephole? I suggest you give it a try. I only watched the video once so I wasn't combing it for careful statistics, but I couldn't help but notice that women are mainly (not only) shown shopping, applying make-up, dressing up, and looking young and cute. The roles of cultural leaders and teachers are occupied by men. All of the artisans (e.g., sushi chefs, calligraphers or sumi-e artists) are men. Women are mainly shown as taking instruction from men (awa dancing), as housewives, old women smiling pleasantly as they eat, drink, or pray, and as paid entertainers for men (geisha and maiko). Well, that and as cutesy young dolls who shop, walk around smiling, or hang on the arms of  men.

This is the insidiousness of mass media messages. You wouldn't know that a lot of the daily cultural load is handled by women in Japan from looking at this clip. To really know the real people in Japan, it's rather good to know this. There are more women learning and teaching ikebana (flower arranging), learning to put on and wear kimono (a huge deal given their complexity), taking cooking classes, and playing shakuhachi (Japanese flute) than all of the awa dancers in the country. The main cultural focus in the video, however, is on the things that men get paid to do and that men are generally only allowed to do (like being sushi chefs). There are multiple glass ceilings in Japan. One is in business, but there is also one in cultural pursuits. Women are either overtly or covertly excluded from the truly prestigious or profitable cultural pursuits as teachers, even when they might make up the majority of the students in some cases. There are also a host of things they simply are not allowed to do at all (like act in kabuki).

One thing I have to give the video props for in terms of accuracy is that it does reflect the culture. It is a more overtly sexist society in which women are mainly seen as being supporters of men and objects of interest to men. If it seems like I'm railing against sexism in Japan, then I've expressed myself poorly. My point isn't to decry the Japanese sexist culture. All cultures are sexist to varying degrees and I've seen plenty of sexism in the U.S. since returning. The main difference is that it's more insidious here and people find a way to justify it by hanging their conclusions on character, ability, or some other such nonsense rather than seeing that they are being sexist. My point is about seeing things from varying perspectives and how my friend and I saw this video from two very different, but equally valid, points of view. He saw a delightful little tourist video. I saw the reflection of a culture in which women's role in the society is underrepresented, undervalued, and limited.
Posted by Orchid64 at 8:00 AM