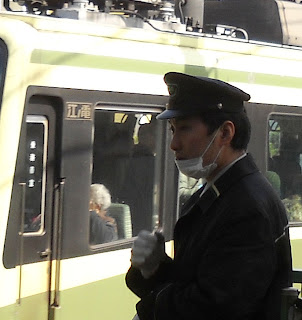 If your germ-bra slips down, it's not going to protect anyone from disease.

One of my former high school classmates recently messaged me on Facebook to say that he was going to be meeting the head of a major Japanese company that had acquired his somewhat less major American company. He wanted any advice I could give him about dealing with this meeting. During our exchanges, he mentioned that a woman who went to Harvard or Yale or some impressive school and studied Japanese culture at a Buddhist monastery said that you had to carry a handkerchief, but she didn't say why and he wanted to understand the why of the things she told him. I guess really smart people don't have time for giving you reasons.

As far as I know, the reason most Japanese people carry handkerchiefs is to dry their hands in public restrooms that don't have dryers or paper towels, to wipe their brows in the horridly hot and humid weather, or to clean or wipe down surfaces that they want to sit on or interact with (like a wet bench after rainfall). The one thing they don't do with them is blow their noses or use them to cover their mouths while coughing. When I mentioned this to my husband, he joked that Americans didn't bother with handkerchiefs, to which I said that they didn't have to since they, by and large, didn't spray their bodily fluids omnidirectionally like a bacteria/viral shower when they were sick. We are taught to cover our mouths/noses when we do such things.

So, as you can see, I still don't miss all of the open-mouth coughing that I experienced in Japan and I haven't forgotten how gross it was.
Posted by Orchid64 at 8:00 AM