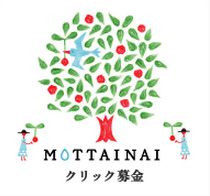 Image from the mottainai info site.

One of my students told me that she went to a curry restaurant and was served an enormous portion. She told me that she tried very hard to eat it all, but eventually, she had to "give up". This type of story, including the conclusion that one should try to eat everything one is served, was very common among my acquaintances and friends in Japan. Some would eat until they were very uncomfortable and successfully clean their plates, and others would do the same without such a triumph.

I asked each time why these folks would stuff themselves and the answer was always "mottainai", which means they didn't want to waste anything. The memories of famine during and after World War II have created a mentality in Japan of not wasting things, especially food. Those who suffered during the war grew up not allowing one grain of rice to be wasted. Even now, you'll find people in Japan overeating so as not to waste food.

Despite the fact that there are different types of waste in Japan (especially in the service of building new buildings every 15 minutes), there is a mentality that food should not be wasted. In the U.S., I've found that people waste food with abandon. Since returning, I've thought that I could comfortably, perhaps lavishly, subsist on the food people bought and never ate or did not finish. I miss the attitude that food is too important to waste.
Posted by Orchid64 at 8:00 AM