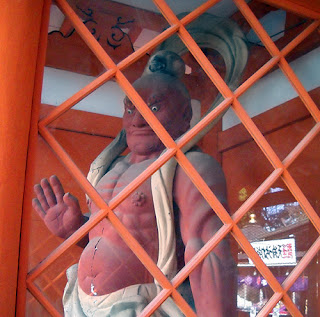 I think they'd even let me display one of these in my apartment window in Japan. Here, it'd send the estate agent into a state of total apoplexy.

I can't speak for everywhere in Japan or America and what sort of situations renters experience. I can say that I knew far more people who rented their places than owned them in Tokyo and that I've talked to people who rent places in the U.S. I also, of course, rented for 23 years in Japan. Not once during my time there was anyone told what sort of things they could put in their windows while renting. This included the sorts of window treatments that they could use. In fact, my apartment and many others do not come with curtains, blinds, or any such coverings. You provide your own and, short of something utterly obscene or disgusting, the sky is the limit. There seems to be quite good flexibility for renters in this regard.

I've been home less than a year and rented for less than 6 months and already gotten guff about what I do around my windows. There are enormous clacking vertical blinds where we are living and while we're hosting a friend's cats for 10 days, I decided to pull the blinds aside and hang up a (plain) sheet for privacy so that the cats jumping onto the window sill at night wouldn't constantly make noise. I put the sheet up at 10:30 pm and took it down at 7:30 am. The first night I did this, the woman in charge of the apartments came rushing over to me in a frantic panic because I hung up what she thought was a curtain. Even after I assured her that it was just a sheet, not a curtain, and a temporary situation because of noise and cats that would vanish in 9 days, she still wasn't necessarily happy, but said that, if I was certain to put it up as late as possible and take it down as early as possible, it would be tolerable until the cats left.

Despite the fact that America is supposedly a culture of individualists with great autonomy to express themselves, there are definitely certain areas of life in which there is much stricter control. I was told even before I moved here about apartments and this window treatment business. I can't imagine what they'd do if I put any sort of decoration in the windows given how insistent they are on the purest of conformity (white blinds and only white blinds). I definitely miss the crap people tended to put in their windows to let their individuality show, as well as not being super controlled about what I could put in mine.
Posted by Orchid64 at 8:00 AM