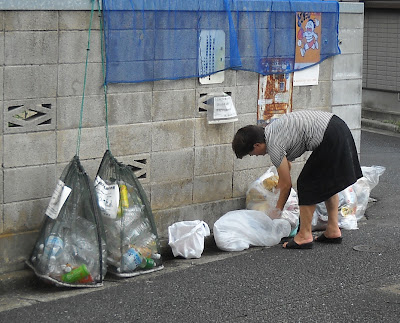 As I've said before, dealing with garbage in Japan is complex. It's so complicated that many Japanese folks get it wrong, too. There are different rules for different neighborhoods and some subtler rules come into play about washing garbage. You can't, for instance, put out a can of food that has expired. You have to empty the food and wash the can. It's easy for people who have busy lives to make mistakes, and when they make them, the trash collection agents won't carry away the improperly handled trash. They just leave it there with a sticker. In some areas, one of the residents will take it upon themselves to fix the mistakes others make with their trash. In the picture above, a woman wearing plastic gloves is sorting other people's improperly organized trash so that it will all be taken away rather than left behind. I like how Japanese people will do this sort of dirty work for the benefit of the community for no pay or overt expressions of gratitude. No one asks them to do it and it certainly isn't their job to clean up other people's messes.

This behavior shows a sense of looking out for the greater good rather than simply saying, "not my problem," and ignoring it, and I'll miss that.
Posted by Orchid64 at 8:00 AM