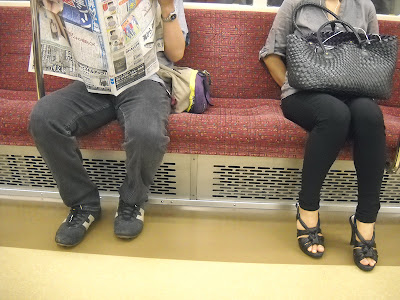 On all public transport around the world, I'm sure there are people who plant their bags onto an adjoining seat until someone comes along and needs to occupy that space. I don't mind if people do this on a relatively empty train, not that there are many "relatively empty" trains in Tokyo most of the time. However, there are people who flop their bag onto the next seat and as the train fills up, either refuse to move it or act as though you're ejecting a precious child overcome by exhaustion from a needed place to rest. They give you a dirty look and make a sound that clearly indicates disgust if you indicate (by hopefully hovering over the empty seat) that you'd like to trade places with their luggage.

I don't know if this is the result of "I don't want a foreigner to sit next to me and grudgingly will permit it" or if it is "I'm a selfish git who has no consideration for others" thing, but I won't miss people acting as though I'm seriously putting them out by expecting them to surrender a seat being occupied by an object.
Posted by Orchid64 at 8:15 AM