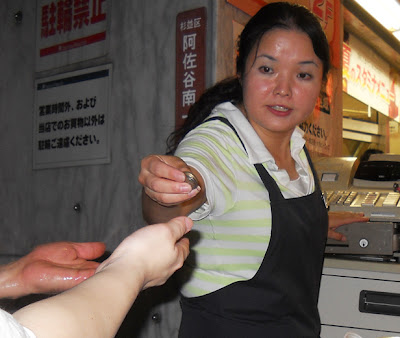 As I've mentioned before, Japanese banks have paltry interest rates on savings accounts. In fact, I'm surprised most people don't hide their money in old bento boxes and bury it in the back yard. That probably has more to do with the fact that so few people have actual backyards than it being considered a lesser option than putting it in the bank. Since I'd prefer to lose as little of my money to inflation as possible, I'd like to make a little interest on my savings. The only way to do that is to wire it back home. This is a big pain in the patootie. First of all, you have to fill out a bunch of forms in Japanese, which isn't so terrible but they appear to require quite a bit of after-faffing in which a polite clerk will take the documents and hand them off to someone who will frown over them and a computer screen for approximately 22 minutes. You can then hand them about $75 in fees and transfer your funds at an exchange rate which is at least one yen worse than the actual rate and wait for the cash to reach your account back home. Oh yes, you also have to tell them why you're sending it home and if they don't like your reason (and suspect money laundering), they're going to go tell the police on you and it'll be "fun" hijinks for all.

I won't miss the hassle, cost, and sense that my privacy is being unnecessarily invaded (in a minimal manner) when I wire money home.
Posted by Orchid64 at 2:16 AM