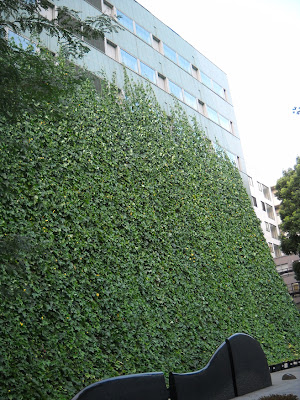 At this stage of the year, the vines are about 4 stories high, and they're not finished yet.

Goya is a vegetable that is often translated to mean "bitter gourd". It looks like a big cucumber with a bad skin disease and is famous for being a part of Okinawan cuisine. Some Japanese folks swear by it and others detest it. It's one of those polarizing things, but mainly, I notice it in the summer when the local government office grows monster goya vines up the side of its building. With post-quake energy conservation (setsuden), it was recommended that many people follow their lead because the vines have the potential to cool buildings by a few degrees. In my area, this massive vine growing project has been going on for years and is part of the rhythm of life in Japan for me.

Seeing the progression of these vines from seedlings in tubs to multi-story wonders to browning debris every year is a reminder of the cycle, resiliency, and power of nature, and how the Japanese can be so particular in how they harness it, and I'll miss it.
Posted by Orchid64 at 8:00 AM