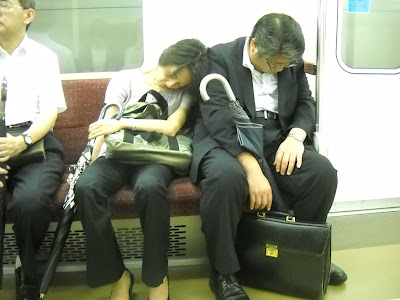 While talking with my sister and one of my friends in America, I asked, "do people ever say that their hobby is sleeping back home?" Both of them were taken aback at my even asking such a question as it seemed like a fundamentally incongruous thing for anyone to assert. My inability to distinguish the weird things I sometimes hear in Japan from the weird things people say back home spurred this query because I wanted confirmation that asserting that ones hobby is "sleeping" is a pretty dumb thing to say. People say it to me all of the time here, and by "all the time", I mean with irritating frequency and not in the least bit in the realm of "rare", and it's not because they confuse the meaning of the word "hobby". Part of teaching is that you ask about hobbies in order to strike up a conversation about something in which the student has an interest. When someone says, my hobby is sleeping, I have to gently remind them that hobbies are not necessary behaviors like eating, sleeping or going to the bathroom, but things we choose to do to expand the scope of our existence. They already know this, however.

I hate it when people say, "my hobby is sleeping," because it sends the conversation to a dead end and it's frankly a pretty dumb, cop-out answer and I won't miss it.
Posted by Orchid64 at 8:00 AM