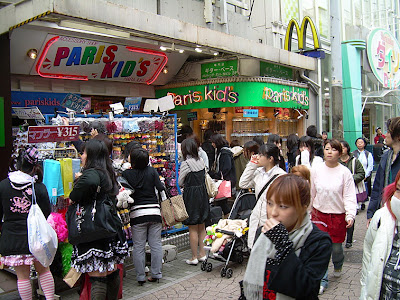 One of my former students works in the fashion industry. She had been working for an Italy-based maker of sophisticated and simple clothing and during much of the time I taught her, she made multiple trips to that country. For several years, my job mainly was to help her improve her English for those trips.

After quite a few years at the same company, and no small amount of difficulty with the management of the Japanese branch, she wanted to change her company and refocus her career from only doing wholesale to also doing retail. To that end, there was a French company at which she wanted to pursue a job. As part of the preparation I gave her for her interview, I wanted to orient her on the cultural aspects and operated from multiple sources (including an excellent resource for teachers called "Kiss, Bow or Shake Hands") which asserted that the French, when in business situations, could come across as cold, abrupt, and unfriendly. I specifically told her not to lose heart or confidence if her interviewer seemed aloof and did not smile at her or engage in small talk or banter to warm things up. This was simply their way in business, particularly with total strangers.

Though I warned her that this was going to be the case, she returned from her interview in an extremely pessimistic state of mind. She said she was sure that her French  interviewer intensely disliked her and that she would not get the job. I reminded her that I had told her before that the lack of smiles and friendly banter as well as the abrupt and officious way in which she was handled was quite normal for a French person in the setting in which she was interviewed and that I was sure he did not dislike her or necessarily judge her poorly. I'm certain that she received this as nothing more than well-intentioned reassurance (and it was), but I think she didn't really believe me at the time. Later, when she was offered the job, I think she accepted what I said as essentially correct. After all, if the president really disliked her, he wouldn't have hired her.

My student had a lot of experience with foreign people, especially Americans and Italians. In both cases, she dealt with people from cultures who were generally warm, gregarious, and went out of their way to be friendly even when they were in a business setting. Her default assumption was that foreign folks were all like this if they liked you. The only reason for foreigners not to be treat you in that fashion was that they had taken a dislike to you. My rather emphatic attempts to inform her about the differences in French business culture could not override her default assumptions about foreign people in general.

In Japan, I was constantly dealing with default assumptions made about me by the Japanese. Sometimes this annoyed me because I had to consistently remind people that they could not check off all of their neat little boxes on their "American" check list for me. The truth is that, like my student and my efforts to contextualize her experience with a French interviewer, they often simply could not reconcile their belief with the reality and rejected the truth in favor of their default assumptions. Unfortunately, I continue to see this here at home. In fact, I see it to a troubling extent.

The truth is that I regard the exercises I had in challenging default assumptions in Japan as a valuable life lesson which serves me every bit as well, perhaps even better, in the U.S. as it did in Japan. The Japanese are not the only ones who operate in the world based on erroneous notions that get stuck in their heads and they aren't the only ones who won't allow reality to intrude upon them. Here in the U.S., I witness such behavior every bit as much as I did in Japan. The main difference is that it is less about foreigners, and more about life in general.

Recently, one of my friends was upset that she, in her opinion, was not being recognized by her peers for her academic performance and hard work while my husband was receiving such recognition. She ascribes this to male white privilege because the default assumption is that white men get everything women are overlooked (and particularly in her case since she is a member of a minority). While that may be the case for many people, that default assumption doesn't hold much water in this case.

The truth is that the "recognition" my husband receives comes largely in the form of kidding from classmates. They'll make fake noises to indicate that they are impressed when he has done reading they have not or answers a question which no one else can about an arcane detail. Male classmates specifically often make fun of other men and are less sensitive in general to being made fun of. I believe one reason my husband is "recognized" is that people feel more comfortable ribbing him about being a diligent student. I think that comfort levels with mocking or making fun of women in general are much lower, and more specifically for this friend who is more sensitive and emotional than my husband. That is in now way an insult against her. Nearly everyone is more sensitive and emotional than he is, including me.

Beyond this point is the fact that my husband is very active on social media and interacts with classmates on Facebook. Because he is so attentive to his studies, he sometimes uses Facebook to inform his classmates about mistakes that cost time and effort. Recently, the class was given two chapters to read, but the syllabus only instructed that one of them be read. He wasted his time reading both, but before others did the same, he let them all know about his error. He does this not to show off, but simply because he tends to notice these things first and wants to inform others who are in his class. Similarly, he would like others to inform him of such things, but they tend not to get to the material as early as he does. This is, in essence, leadership behavior that demonstrates his attentiveness to his studies. He also comments when other people post about homework concerns so they can see that he knows what is going on and can assist.

So, his "diligence" can be observed more overtly because of this type of social networking interaction. Our friend does not use Facebook with her cohort in this fashion and her diligence is mainly seen only in structured interactions within the classroom. However, since her default assumption is "male white privilege results in greater recognition", she is not aware of other factors which may be playing a part in the disparity in how they are recognized by their peers. Unless she first questions the default assumption, she will never know the real truth and find avenues to receive similar recognition should she truly desire it.

The reason I'm talking about this is that I believe that many default assumptions are made everyday in our lives. I had to think about this a lot while living in Japan and it was tiring, but I believe is useful in developing a perspective to guide you through your entire life, not only to help one understand other cultures and how to navigate them.

One default assumption I made for many years was that all rude behavior directed at me as an extreme minority in Japan was because of prejudice and I believe my friend's sense that her being a minority female is the reason she is not recognized for academic dedication springs from a similar well. I realized, after some time, that my default assumption about the way I was treated was wrong. Sometimes people are jerks because they are not nice people, had a bad day, or hate their work, and sometimes it was because I was a foreigner. In some cases (such as hearing them mutter the word "gaijin" or overtly saying derogatory things), it was clearly prejudice. In others, it was unclear. I realized how important it was to question such things because I was bombarded by difficult to interpret experiences in Japan. It is my hope that, one day, my friend will also consider other possibilities when she interprets her experiences.

What I have realized further here at home is that it is just as important to be open to multiple interpretations here as it was there. There is a tendency in people all over the world to explain the world in accord with the default assumptions of their current worldview. Sometimes, they are right, but sometimes, they are wrong. Often, we simply cannot know for sure, but there is value in at least opening the door to other possibilities and weighting their potential as an alternate explanation.

This sort of reflection on alternative explanations applies to all sorts of situations and in both those in which we know much or a little about someone or something. It's a mental exercise you can do for experiences both large and small from wondering why a kid is having a tantrum in the market (tired? sick? ADHD? spoiled brat? hungry? bad day at school? frustration?) to thinking about why there are 10 flavors of powdered coffee creamer on the shelf (test marketing? consumer desire for variety? contains some chemical that can be used in illicit drug making?). The exercise itself is good for expanding your worldview and creativity as well as deepening your options, compassion and understanding.

If I could get people to do anything in the furtherance of better understanding the world, it would be to actively start questioning their default assumptions and to at least entertain other possibilities. The value of this in terms of seeing the world for what it is rather than for what you believe or want it to be is immeasurable, no matter where you live.
Posted by Orchid64 at 8:00 AM