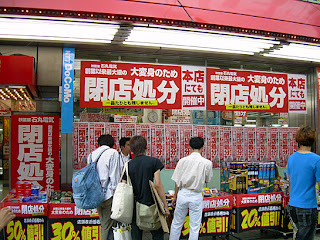 Akihabara used to be a mecca for me back in the days when I was an Apple computer fan. I used to go there and drool over the latest hardware and even buy the occasional Japanese Mac Fan magazine and do my best to read through it as well as install some of the shareware and demos on the discs (which were often in English because they hadn't been translated into Japanese). By the time I left Japan, it was a mecca only for people who wanted to engage in maid cafe (or other hostess establishments for lonely nerds) or play video games. Sure, there were still some electronics shops, but the mega stores were where most of the action was concentrated. The little places that used to make up the majority of businesses there had been replaced by otaku (geek) establishments.

Still, since coming back to the U.S., I've found the electronics shops abysmal. Yes, buying online is great (and cheap), but it's fun to walk around eletronics shops when you're a tech geek, and I'd much rather buy my DVDs or small items from a real shop than buy online. I miss places like Yodobashi Camera or BIC Camera. Even if they were shadows of their former selves, they weren't the ghost towns I'm seeing here.
Posted by Orchid64 at 8:00 AM

Email ThisBlogThis!Share to TwitterShare to FacebookShare to Pinterest
Labels: Akihabara, electronics, will miss