Randoms Thoughts: The Pitfalls of Interpretation 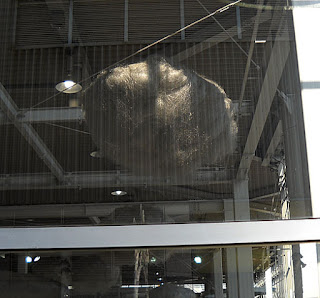 These were hanging from the roof of a Toyota exhibition in Odaiba. You may interpret their presence as you see fit. My guess was giant tribbles were taking over Japan, but they could just as easily be prototypes for a new Donald Trump hairpiece or steel wool pads for cleaning the pots of giants.

Recently, I read an article about family therapy in Japan. It was published in an academic journal by someone who clearly had more than a few brain cells to rub together, was more than adequately educated, and had done some time exploring the topic at hand. It was also full of what I would say were dubious assertions and misinterpretations.

I am intimately acquainted with the short-comings of academics. In fact, I was educated to look for such things and to dissect the validity of research and to seek out biases. In essence, I was taught to exercise my critical thinking skills at every turn. Any time I hear about a study, I know that what I'm reading is almost certainly going to be flawed. One of the reasons is that people like to have their theories validated and will cherry pick those sources that are most likely to support their viewpoint and ignore or invalidate those which do not. The article I read relied heavily on a few academics, one from Japan, one from a mixed Asian background with experience in Japan, who did research which supported his contentions.

There are numerous other reasons to suspect the validity of anything you read which I will not bore the reader with. That is not to say that they are 100% "wrong", but quite often they are far from 100% "right". This particular article contained more than a few dubious translations of Japanese concepts (such as amae). They chose simplistic one-word translations in most cases which helped support their notions regarding independent vs. dependent cultural concepts. This article was talking about how family therapy had to be very different in Japan because of the old "individual" vs. "group" thing which we all know is the great divide between Western and Asian culture and something we must all meditate and fret upon, especially when attempting to shoe-horn our evil American concepts into the sheeple Japanese mind. After all, it's not like they have any choice to but choke down whatever we offer them.*

One of the things that was also used to support the idea of the collectivist culture was the fact that the Japanese had no word for "privacy" before the West came in and gave it to them. The fact that they use the katakana word "puraibashi" was held up in support of this. Before we came along, they didn't need such a concept because they were all one big, happy  humming beehive of a culture working collectively for their queen bee (aka, the emperor). This is the point at which my eyebrows shot up and my head started shaking. A smart person wrote the article, and a smart person almost certainly reached the conclusion he wanted to reach based on a lack of real world experience with the culture and a rush to the finish line on making his point rather than deeply reflecting on what was being postulated.

Interpreting cultural differences is a tricky business, especially when you're doing the vast majority of it from behind a desk or computer screen based on what you read in books, journals, or from single individuals who have a vested interest in supporting the same world-view as you. Think carefully about the word "privacy" and what it tends to apply to. It does not apply to notions of individuality. I am an individual whether I have privacy or not. I conceive of myself as a separate and independent entity with or without privacy. The notion of privacy applies to that which I keep to myself and will not display to others, not whether or not I am interconnected and dependent on others. What is private is perhaps kept so for various reasons, including, but not limited to, the idea that I should feel shame should I reveal such things.

While I cannot say for certain, I believe that the word "privacy" didn't exist in Japan as we conceive of it was more related to the fact that the women didn't wear underpants until we gave the idea to them than it has to do with an individualist vs. group-oriented culture. Panchera, or the obsession with girl's panties, is attributed to the West's interference in Japanese culture. Before we gave women underpants, their loins were not a subject of mystery. In old timey Japan, or so I've read, mixed gender nudity wasn't a big deal. We (and when I say "we", I don't mean "me", but rather all of the missionaries who gave Japan their ideas along with things like educational facilities and hospitals) brought them our prudishness and suggested loins should be girded. This, my friends, is where the concept of "privacy" more appropriately comes in. It's about what we need to hide from others, and they didn't need the word until we told them that they weren't living in Eden and that they now needed to be ashamed of their nakedness.

Am I sure that I am correct about this? No, I'm not. However, this is a far more nuanced and informed possibility than the old tossing of everything into the bucket of "individual" and "group" that people who consume culture second- or third-hand tend to offer. It also fits the logic of the word and it's true meaning better. The non-existence of the word "I" (watashi) and "person" (hito) would be better indications of a lack of individualism, but those words do exist.

I've found that most people all around the world are prone to such simplistic interpretation. They build a framework of how the world operates and slot information into the frames. They do not question the strength of the structures they are organizing experiences and perceptions into. When they encounter square pegs, they can find a way to contort them into round holes rather than question the shapes of those holes. I find that this happens far too often and easily when interpreting other cultures because it's a lot harder for someone to call you on your narrowness of thinking when they are not well-versed in the topic at hand. My point in this post is not to hold myself up as some paragon of broad-thinking. I have made and continue to make mistakes, too. I just offer that we all need to be open to the possibility that a shallow observation, what you read somewhere regardless of the legitimacy of the source, or what one person from a culture tells you is far from the "truth". This is something of which I am continually reminded as I continue my journey through life.

*Just to be absolutely clear, this is huge honking sarcasm, folks. Anyone who has been following this blog knows that I vociferously object to the "sheeple"  notion of the Japanese culture and feel that they, like every single culture's people on the planet, consume what they want to consume of their own free will. I find the idea that any country's people are somehow incapable of accepting or rejecting aspects of American culture racist and insulting. It reduces them to the status of children who cannot refuse their parents orders that they consume what they are told to consume. Let's give them the same credit we give ourselves to be in at least some amount of control of their own choices.
Posted by Orchid64 at 8:00 AM