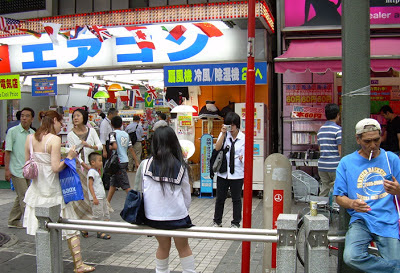 You can just feel the peace and harmony.

There is a 1937 movie made by Frank Capra called "Lost Horizon" which has been on my mind lately. For those who are too young or non-trivia-minded to realize this, he's the man responsible for "It's a Wonderful Life." That fact may make you want to lay Christmas flowers on his grave or go and stomp on it while cursing wildly. It all depends on how you feel about one of the most over-played and well-known movies of all time in America.

Personally, I like Capra's vision and how it mixes hopefulness, high-minded ideals and unrealistic and appealing heroes and heroines with the grim facts of reality. There's a lot of saccharine in his movies, but there's also enough pain and bitterness in the mix to stop them from being too sweet to bear. The endings are usually good, but the road to what looks like "happily ever after" is paved with a lot of bumps. They are fantasies, but we all can use a little of such in our lives. As long as we know that they aren't real and can keep grounded in reality, there's no harm in a little indulgence while we allow a film to play before us for two hours or so.

"Lost Horizon" is about a journey to a paradise hidden in the mountains called "Shangri-la". (If you want to watch this movie without being spoiled, then you may want to skip the rest of this post. This is your only warning.) Due to its secluded position, it cannot be detected by devices of the day, is hard to see in aerial flight, and experiences paradise-like weather conditions in the midst of brutal frozen rocky mountains. The people who live there are content in their isolation for the most part, and they claim to experience incredible longevity and good health due to the perfection of the atmosphere, food, and lifestyle that they enjoy.

Unfortunately, the population is relatively stagnant except for the occasional unfortunate traveler who stumbles into their happy valley. Because of this, a British foreign secretary, Robert Conway, and his brother have their plane hijacked in order to bring them to Shangri-la. They chose the former because of his views and outlook and the latter was pulled along for the ride because he happened to be on the plane. Conway takes to the culture of this paradise well and is happy there while his brother feels restless and longs for the comfortable values and surroundings of his home culture in England. Conway's brother falls in love with a woman, Maria, who says she was stranded there and hates the restrictions placed on her by the high lama who runs Shangri-la.

Maria says that the high lama is delusional and is lying about many of the points of living in Shangri-la including the longevity and perfect health people experience. She desperately wants to escape to civilization and convinces Conway's brother to leave with her and try to make their way through the freezing and treacherous mountain landscape. Conway reluctantly goes with them after his brother persuades him to go along.

I won't spoil the rest of the movie, but this is on my mind because I have concluded as of late that Japan represents a Shangri-la of sorts to many Western folks that I talk to about it. It's a place in which they believe people live in placid harmony with one another and have higher values and ideas than us squabbling, money-grubbing folks in the West. They eat a pure and perfect diet composed of soy bean curd, raw fish, rice, vegetables, and miso soup. That food is so nutritionally perfect that they live longer than any of us and experience better health.

The myth of "wa" pervades Western thinking. If you go to the Wikipedia link, it includes this line, "It implies a peaceful unity and conformity within a social group, in which members prefer the continuation of a harmonious community over their personal interests." This makes the Japanese sound like a homogeneous group that sets aside ego for a high-minded ideal society. The notion that the Japanese are like this is naive at best, and dehumanizing at worst. In an attempt to elevate them to a status of more actualized individuals, we deny them the emotional needs and complexity that we grant ourselves.

The truth is that "wa" is absolutely a part of Japanese culture, but it's not about a lot of happy people subscribing wholeheartedly to the value of peace and harmony and smiling while they set aside their own interests in the interests of the group. It's about struggling to silence ones ego and id in the interest of getting along with others. Its about judging status and deciding when one can act in ones own interest and when one should step back and defer to someone who is perceived to be of superior status. It's about being pissed off and struggling with whether to express your feelings or to suppress them. It's facing the same roiling boiling cauldron of emotion that every single human on this planet faces in their own individual way with a difference. And, you know what, there's absolutely nothing wrong with that.

The main difference is that Japanese are acculturated to land on a different side of this struggle than Western folks are. While an American person who is pissed off because she imagines you stole a parking space she was waiting for might unconsciously decide 8 times out of 10 to say something nasty to you because she can't resist making sure you know you've done something "wrong" in her opinion, a Japanese person in the same position won't say anything 8 times out of 10. This isn't because they both aren't upset, but because the Japanese person is much more likely to "know" that such an interaction may result in upsetting the public peace (by causing a scene) and therefore he will swallow his pride and just let it go.

Similarly, the notions that Japanese people are pious eaters is wrong. I can't tell you how many times people who don't have a lick of first-hand experience in Japan have told me how Japanese people eat, and it has never been anything like what I actually see. I'm told they don't eat sweets despite the fact that there are numerous confectioners and everybody seems to know about Pocky and weird KitKat flavors. I'm told they don't eat fried food yet people are very familiar with tempura (and anyone who has seen a deli in a Japanese market knows that it's a breaded, fried nightmare custom-built to supplement bento boxes). I'm told that they don't eat meat yet there are 3,598 McDonald's in Japan and numerous other fast food places (MOS burger, Lotteria, Burger King, DOM DOM, etc.) serving burgers. I guess the 2% of the population which is not Japanese is really putting the beef away everyday to keep them in business. But there is a need to believe that they eat pure and clean and therefore experience superior health and longevity.

The reason that "Lost Horizon" came to mind is that I realized that the book and movie reflected a need on the part of many people, particularly Westerners, to believe there is a place somewhere in which society is simply better. Somewhere in our unconscious minds, the hope that, under ideal conditions like those in Shangri-la, people will naturally accept an order to society which is conducive to harmony and peace, lurks. I think that there's an appealing notion that having your needs met in such a way makes people more capable of setting aside their greed, selfishness, and strong desires, even when their role might be a mundane and repetitive one like harvesting fruit or cleaning toilets. We need to feel that somewhere life is better and people can rise above their inherent pettiness. That's what fuels stories like "Lost Horizon". It's also what seems to fuel the fantasies about life in Japan.

I understand this need and I'm sure that somewhere in my cold, cynical heart, it lives within me, too. However, I'm concerned about the way in which this desire and the accompanying fantasies about Japanese people tend to set them apart from us as fundamentally different organisms. By projecting a fantasy personality onto them, we don't ascribe the same rich and complex psychological inner life to them that we all possess. This simplification diminishes them even as it seems to be elevating them to a status of being superior humans in a superior society. It dismisses the suffering people endure as a result of living in a society which expects them to set aside their own needs and the mental cost of subscribing to the notion of "wa". It's not about crediting them for the sacrifices they make, but rather about having compassion for them and what they endure. It's about recognizing that there are profound psychological costs to a society in which peace and harmony come at the expense of individuals and appreciating what that says about their culture as well as ours.
Posted by Orchid64 at 8:00 AM