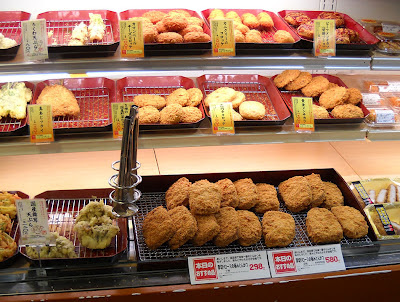 Plenty to choose from, as long as you like your food breaded and deep fried!

The supermarkets in the U.S. are bigger than those in Japan. This, in and of itself, means that the deli sections are bigger than those in Japan (as are the bakeries). The problem I had with Japanese delis though wasn't necessarily the size, but rather the range of food options. If you were going to buy something somebody else made for you, then you were going to either have to eat (less than stellar) sushi, or consume a heaping helping of fat in most cases. The main options were almost always breaded and fried items like pork or chicken cutlets, croquettes, or various types of tempura. The salad options more often than not included a heavy mayonnaise component, especially in potato and pasta salads. While I'm not one to demonize fat as an integral part of ones diet, this was far outside the range of what one should be eating. It was rare to find sandwiches, wraps, or light salads or other types of food. Roast chicken or any sort of meat which wasn't deep fried and breaded was generally absent. When present, it was more expensive than the fattier options.

One of the reasons I was encouraged to cook for myself was that the deli options were so limited in Japan that I couldn't stomach the pre-made food. While that was a good thing on the whole, I still wish that I could have occasionally picked up some food when I was tired and didn't feel like cooking. I very much do not miss the Japanese deli food.
Posted by Orchid64 at 8:00 AM