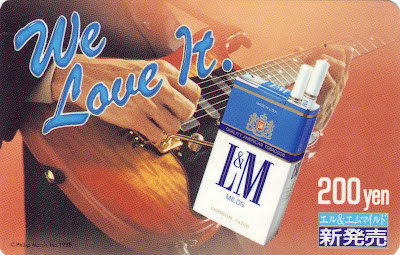 There is a lot of criticism of American cigarette companies in Japan because they market more aggressively and sell their addictive tubes of tobacco more cheaply there than they do back home. That's not precisely true these days because each state has different prices. If you're talking about New York, where they are nearly $12 a pack, then, yeah, they're much cheaper in Japan. If you're talking about West Virginia, where they are a quarter away from costing a fiver, then it's not nearly the case. In Japan, cigarettes are 400 yen now, which is about $5.10.

Cigarettes used to be a lot cheaper in Japan than the U.S. A big reason for that was the taxes weren't very high and though the tobacco companies were blamed, it really was about the government keeping their hands off of the situation and allowing the price to stay low so that the locals would stimulate the economy with their vice. As you can see by the ad above, from 1988, cigarettes at that time were a mere 200 yen. 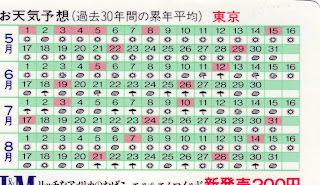 The fact that the price used to be a lot lower isn't incredibly surprising. Everything was cheaper in "the old days." The thing which I found amusing, and the reason for this little memory post is that the back of the card (which is about the size of a business card) included the above calendar. If you look closely (or click the small image to load a bigger one), you'll see that there are little pictures predicting the weather everyday for 4 months. In this day and age, I'm pretty sure that no company would attempt to offer such information as an incentive for hanging on to their ads for several months. I think people are absolutely more savvy about the inability to predict daily weather so far in advance. Beyond that, with cell phones and weather information on demand, people can get more up-to-date information on the fly. The days when Japanese people had a need or interest in such things died long ago. This is just a quaint reminder of how things have changed in a relatively short time.
Posted by Orchid64 at 8:00 AM