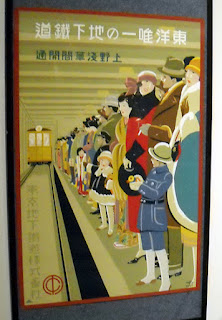 Before I get into this, let me say that I know and love many wonderful individuals who were born and raised in Tokyo. That being said, when you deal with the residents en masse, and as strangers, a certain character picture develops. Edokko (or people born and raised in Tokyo) tend to be reserved, feel they are more sophisticated and proper in their speech, and less welcoming of strangers and their differences. They also tend to be more self-involved and slow when walking around public spaces and are much more likely to gawk at the gaijin. Not every person in Tokyo is like this, not by a long shot, but enough fit this character in general to make them harder to live with. Honestly, I found that the people in Kobe and Osaka were a lot less annoying when I traveled in those cities.

I won't miss the generally unwelcoming character of people in Tokyo and how it makes living in the city more stressful and isolating.
Posted by Orchid64 at 8:00 AM