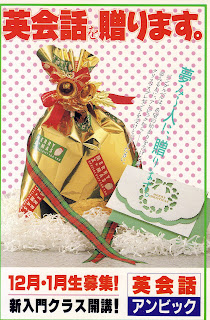 My very first exposure to teaching in Japan came second-hand through my husband's experiences. At the time that he was dipping into the world of ESL in Japan, he was my boyfriend rather than my legally recognized partner of 23 years. He signed on for a 1-year hitch at a company called AMVIC and it's safe to say that he operated rather cluelessly in the job for most of his tenure there. Looking back on some of the things he did with the cultural understanding and perspective I now have, I'm sure that the Japanese were pretty irritated by what he viewed as fully rational choices at the time, like going out and walking around the local area when he had no lessons scheduled rather than sitting in the office and frowning at lesson preparation materials and pretending that he actually had work to do.

AMVIC split into two different schools some time after my husband returned to California. Those two schools were Aeon, which still exists, and Geos, which sunk a few years before I left Japan. I visited his school a few times during my month of vacation there in 1988. The Japanese office staff were gracious to me, but I think, in retrospect, that they may have been uncomfortable with a girlfriend popping in to meet her boyfriend for lunch. We didn't exactly fondle each other in front of them, but such things tend not to happen much in Japanese offices.

The picture above is a memory of AMVIC. It's a postcard that the school produced for Christmas to send out to their students. My husband and I also have a poster of this picture which he saved as a memory of his earliest days in Japan. Seeing it reminds me not only of what was one of the best months of my life and the reason I decided to live in Japan, but also of how staying there for a short time is not enough to really understand the culture. AMVIC is where my husband did many things wrong, not because he wanted to, but because nobody explained to him that things were different there as part of his training. Too often, the focus is on the minutiae of getting along in Japan like how to use chopsticks, bowing, or greetings, and not on the broader aspects like communicative indirectness and the expectations of your particular workplace. If many foreigners fail to get along, a big reason for that is that they have no idea how to succeed.
Posted by Orchid64 at 8:00 AM