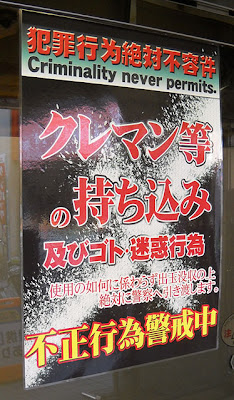 Let me say right off the bat that everyone in every culture lies. The type of lying that is done is and the pervasiveness and social acceptance of lying is, however, different. One source of constant frustration for me is the frequency of useless (or marginally useful), pointless, and sometimes totally naked lying that occurs. In my former office job, we were lied to constantly about inane things and asked to lie about equally inane things when the truth wasn't something bad or offensive. It was just about face saving, keeping communication vague or confused, or simply opting for what was expedient over what was honest. I believe that this is, to some degree, linked the cultural traditional of tatamae and honne (true face/public face), which makes lying more acceptable if it is seen as being in the interest of maintaining harmony with the group.

I could give many examples, but one case in point occurred when I was asked to schedule a freelance job and was informed that the company that wanted the job insisted on Thursday afternoon, so I couldn't schedule the job for Friday when it was preferable for me. That was lie number one. Lie number two went out to the company itself when the salesman told them that I didn't have enough time on Friday to accommodate their desire to have the job done on Friday. There was never any need to lie to me or the company, but the salesman didn't want to bother to tell the company, "we'll check her schedule and get back to you." To simplify his work on a trivial matter, he lied, then had to lie again when he was caught in the web made by the initial lie. The end result is that both the company and I did not get the schedule we both wanted (and that happened to be in sync).

I won't miss the frequency of these types of useless lies that I experienced in Japan, nor being pressured to tell them myself.
Posted by Orchid64 at 8:00 AM