Will Miss #481 - dislike of medication 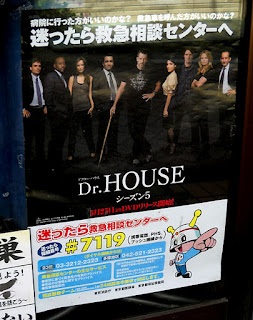 Despite the fact that doctors love to over-prescribe medication every time a patient comes in with fatal toe jam or a bleeding hang nail, Japanese people in general are not the same sort of pill poppers as people in the U.S. One of the reasons that alternative medicine, including kampo (Chinese herbal treatments), acupuncture, and whatnot are so popular in Japan is that there is a general sense that medicine is to be avoided if at all possible. Strong medicine in particular is harder to get in Japan, which can be good and bad depending on your condition. However, I learned that most modern medicine is handled by the body as a toxin and is only to be taken when absolutely necessary, yet I see people all around me not only taking it like candy, but swapping pills like baseball cards.

I'm uncomfortable with the casual attitude toward taking strong medicine that I see around me and feel that people might be better off in some cases if they gave their bodies, their diets, and yes, even maybe some herbs a chance before they start pushing their livers to deal with the hard stuff. I miss the Japanese attitude toward medicine.