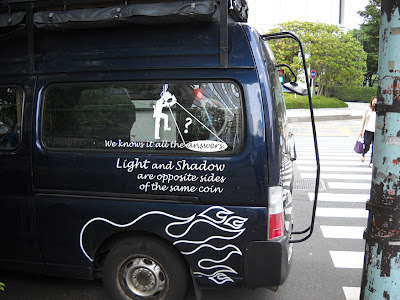 One of my former Japanese coworkers was forever running around turning on extra lights in rooms that I happened to be in at work. I always told him that there was enough light for me to see, but he insisted that it was too dark. I don't know if there is any sort of difference between brown eyes and blue ones in terms of the need for light, but my blue-eyed boss also had a similar issue. Whatever the case may be, the lighting was always ample in Japan. I can't say the same for my experiences in America.

I've stayed in three different homes since coming back to America and one thing I never realized is that it's hard to light a large, open space well. Yes, there are multiple lighting sources centered in areas of the greatest activity, but there are always dim spots that branch over into various spaces. In my tiny Tokyo apartment, I never had an issue with the light covering all of the room, even when it was only a single bulb or fixture. Since coming home, I feel like I'm perpetually living in twilight without a bright, central source of light for the spaces I'm in. I don't think this is because things have changed, but rather because I grew accustomed to the manner in which small spaces were lit in Tokyo.

I miss the lighting I experienced in Japan.
Posted by Orchid64 at 8:00 AM