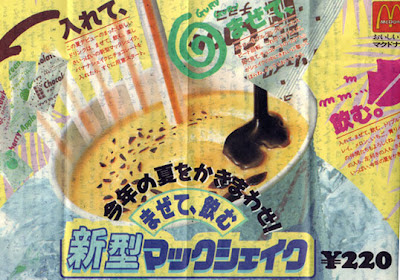 As those who know the story of my romantic history from what I've shared on this blog, from late July 1987 to June 1988, my husband and I were conducting a long distance relationship between Tokyo and Pennsylvania via old-style correspondence. I have two enormous photo albums which I put together during our separation as well as a huge box of written correspondence. At the time that I was being sent these things, I could not understand a word of the written Japanese, nor could he.

The albums and letters were in storage for 23 years and I recently have had access to things I had forgotten existed. Looking back at them after my time in Japan provides new insight because now I can read much of what is on the bits of Japanese memorabilia that he sent me. It's very strange knowing now and knowing that I didn't know then.

The above is the paper liner from a tray he got at a McDonald's in 1987. He wrote a letter to me on the back of it which indicated that he felt this was an option to choose different flavors of shakes, but I think now that it was about having the option to mix and match flavors. The interesting thing to me is not that they offered this type of shake as it's pretty mundane (well, except for the melon flavor, which is not all that common in Western countries). It's interesting to note that the price of a shake hasn't changed in the last 23 years. They were about 200 or so yen then and they still are now, barring any sales.
Posted by Orchid64 at 8:00 AM