The ribbon that I had to pin on my shirt to keep me categorized with my tour group.

Package tours are a big part of any tourist industry, but they are a rather different animal in Japan, at least in my experience. The whole purpose seems not to be to experience the sites or fully digest the atmosphere. It's an exercise in efficiency. How many places can be seen in the short amount of time that the tour is going on? As I mentioned in one of my posts, I am not a fan of the guided tour experiences because of this point. 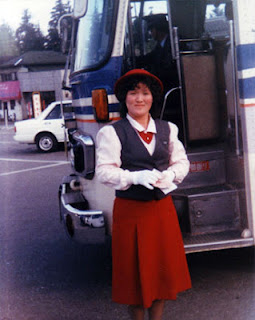 In 1988, I went on a Tobu (same company that owns the department store) package tour to Nikko. For those who don't know, it is a popular tourist spot in Japan which has a lot of temples, lovely nature, and monkeys. The tour we were on seemed to be designed to make sure we got to take passing glances at every one of these things, but made certain that we didn't get to take many pictures or have a good look at anything.

We piled onto a bus in Tokyo, headed off to Nikko, and then found ourselves being marched all over the place at top speed by a nice, very friendly, but firm about efficiency tour guide. When we paused for a moment to actually try and look at one of the temples, she'd admonish us to keep up with the group. Since we wanted to actually look at things, this happened several times. This is something I've already discussed. However, there is one other memory which I believe is unique to the time period in which our tour was conducted and an experience that I am not sure would happen now because things have changed a lot in the last few decades or so.

The package tour that we went on included a variety of things; it paid for the cost of travel, a guide, and the tour. It also included a group photo of everyone in front of a temple on our bus at the end of the tour.* My future husband and I were the only two foreigners in the group and we congregated with a lot of middle-aged Japanese folks, a few kids, a few young women, and a few teens for the photo. When the photographer was preparing us for the shot, my husband did something which people often do in photos and put his arm loosely over my shoulder. This was not a gesture of overt romanticism, but something even people who are friends do, too. The photographer scuttled over and started speaking in an agitated way. We could not understand him, so he took my then-boyfriend's arm off my shoulder and scurried back over to the camera.

When we got the photo back, there was something else which we noticed besides the fact that everyone was trying their best not to touch their neighbor in any way. There are 21 Japanese people in the photo plus us. Three people in the photo are smiling, my husband, me, and a very young little girl. Everyone else has a grim expression or one in which they are trying hard to look passive or pleasant without actually smiling. Though the photographer stopped my husband's casual draping of his arm around my shoulder from "ruining" the shot, I'm sure our smiles still managed to wreck things for the rest of the group. ;-)

*I would include that photo, but, well, I'm not going to let it out there for my stalkers to enjoy.
Posted by Orchid64 at 8:00 AM