Will Miss #480 - chicken breast is cheapest 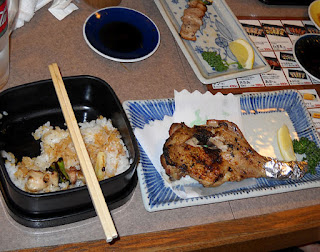 There have been quite a few shocks since coming back to the U.S. and one of them is how the price of turkey and white meat chicken have sky-rocketed. When I was living here before, these types and cuts of meat were cheaper because they were viewed as less flavorful. Personally, I don't like the stronger flavors or the texture of dark meat chicken. I realize that many people prefer them, and that dark meat actually has a better nutritional profile, but I like white meat. So, sue me. In Japan, I could go to Yutakaraya and often buy white meat with skin for about 38 (49 cents) yen per 100 grams (3.5 oz.) whereas dark meat was 58 yen (74 cents) per 100 grams (3.5 oz.) at its cheapest. In the U.S., with the  focus on health and lower calories, things have reversed. Boneless skinless (which I don't like either) chicken breast is more expensive than thighs and legs. Now, I feel extravagant and wasteful for buying what I like. In Japan, it made me feel frugal and savvy.

I miss the fact that white meat was cheaper because I lived in a society that valued flavor over fat content.
Posted by Orchid64 at 2:06 PM