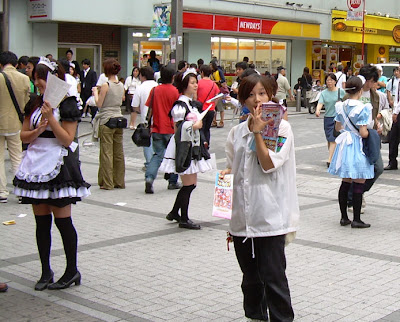 I'm fully cognizant of the fact that my geographic circumstances strongly affect my experiences here in the U.S. as they did in Japan. Nonetheless, my subjective reality is as valid as any other. They may not be generalizable, but they are fair. When I discuss life in Japan for me as opposed to life in America for me, I speak anecdotally, but that doesn't mean it's not a reflection of a truth, at least as it applies to life in Tokyo and life in suburban California.

One thing about life in Tokyo was that fetishistic behavior was something I not infrequently witnessed. Whether it was men reading pornographic papers or manga on the train, panty fetish tokens, or women dressed in costumes in Akihabara to cater to the whims of men who wanted to fulfill certain fantasies, the way in which women were portrayed specifically to serve male idiosyncrasies was something I could not escape. I'm sure that this was, in large part, because I was living in a densely populated metropolis.

That being said, I've been to San Francisco several times and even taken public transportation in the U.S. (I know, the horror!), and I've never seen anyone portray their fetishistic behaviors (note: I did not go to Castro St., but I doubt I'd see women being objectified for the amusement of men there), let alone women on streets in costumes meant to happy up the menfolk. I'm sure there are places in which this happens in the U.S., perhaps outside of Hooters or some places in Las Vegas, but it's not something I see nearly so often here.

While I don't have an ethical problem with it, I could not help but feel bad when I encountered women dressed as maids in Japan because they were rather clearly ashamed of being in that role on multiple occasions. Most of them turned away if someone tried to take a picture of them. If people persisted, they would walk away. I don't think any woman actively enjoys occupying a role which is about objectifying themselves to please strange men, but many do it because the money is good. Their presence wasn't a curiosity to me. It just made me sad. Before panties get knotted in a wad over this, I'd ask that people genuinely consider the question of how they'd feel if their wife or daughter had that sort of job, not because the job is shameful, but because it is steeped in women behaving in a servile manner while catering to a fantasy which often has sexual overtones.

By virtue of circumstances, prudishness, or whatever, I'm glad that I don't encounter such things in the U.S. I don't miss seeing women dressed in maids or related costumes in Akihabara.
Posted by Orchid64 at 8:00 AM