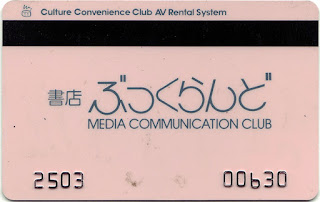 Bukkurando (Book Land). Those who have lived in Japan may recognize the tiny logo in the upper left as the Tsutaya logo. I have no idea why a video shop was named this way, and I don't know when Tsutaya changed it's name/focus. And though it was called "Book Land", we were only renting videos there and I don't recall any books being there at all.


When my grandparents or parents used to talk about how things were far more difficult for them back in their day, I always thought they were exaggerating about the extent of the inconvenience they suffered. Now that I'm older, and I can also talk about how life was less easy back in my day, I realize that they may not merely have been trying to tell me how "good" I had it. While they were clearly trying to tell me to go do the laundry in the machine and be grateful because I didn't have to go beat it against a rock, they were also telling the truth.

By the time I left Japan, entertainment was not limited to the odd T.V. show with bilingual broadcasting, but had expanded to multiple avenues of access to pop culture around the world. While a lot of current video was blocked, we had cable T.V. (e.g., e Fox networks that had crime and entertainment shows as well as movies, a "Mystery Channel" which had loads of British shows, the slop bucket of various shows of all genres, but especially sci-fi called the "Super Channel") and piracy was so easy that you could download T.V. from around the world without fear of prosecution. Keeping up with what was cool with the kids in media was pretty easy, but it wasn't so back in my day. 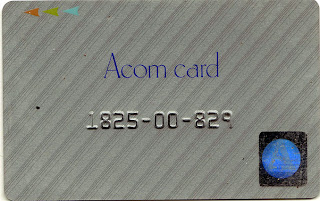 If you wanted to rent "Family Ties", this was your card of choice.

In the late 80's and throughout much of the early to mid 90's, we were pretty much reliant on rental shops and their boxes of video tapes with illegible spines. Since we couldn't read Japanese, the way in which we tended to select the tapes was based on whose picture was printed on the edge of the box. Most of what was on offer at that time was movies rather than television shows. What was worse was that most of the movies were on the older side and there was a heavy emphasis on certain actors or directors who had a higher level of recognition in Japan.

At that time, you could score pretty much any early Audrey Hepburn movie you wanted to lay your hands on, not that many people who were may age wanted them. There was also a pretty full complement of Hitchcock movies as well as a broad range of trashy horror (especially the slashy stuff). The range of foreign movies at that time tended to reflect the very old and the supremely popular, especially in the action genre. There's a reason Arnold Schwarzeneggar was sought for ridiculous commercials for Japanese products, and that's that Japanese people loved to watch him blow people away as much as 12-year-old boys with identity problems and bad skin loved it.

Unfortunately for my husband and I, most of this sort of entertainment was not our cup of tea. And, of course, in that early time, understanding Japanese movies was impossible and they were not subtitled in English for our convenience. Back then, closed captioning in multiple languages was not an option. I remember that we were actually excited at one point to discover that one of the local video shops had begun to carry tapes of the banal Michael J. Fox comedy, "Family Ties". We were delighted to rent them, not because we were as enamored of Fox as the Japanese were (and they were gaga about him and the "Back to the Future" movies), but because it was American T.V. Hurray! We could get a taste of the idiot box from home. It didn't matter that it wasn't a particularly good show or that the tapes were on the expensive side to rent. There was something about the experience of watching T.V. from home that was a balm for the daily sense of being in a culture that felt incredibly alien.

It may sound stupid in an age when you take touching pop culture for granted since you can literally access it nearly anywhere any time, but there was something very comforting at that time about being able to sit in your apartment and watch T.V. shows that you could see back home. When we were bombarded constantly with stimuli which underscored that we didn't belong, the immersion in a story, a setting, and the sounds of home allowed you to forget for a half hour that you were in any place but home.
Posted by Orchid64 at 8:00 AM