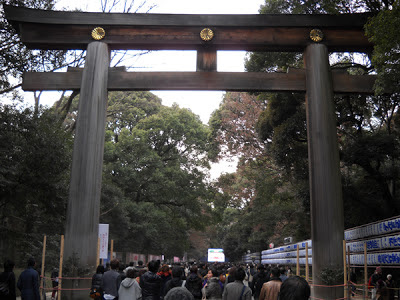 There was nothing in Japan that said, "hey, I'm in Japan," as much as the torii or gates that herald the entrances to sacred spaces (usually Shinto shrines). Despite having lived there for 23 years and having seen a lot of these gates everywhere, they never failed to catch my eye. In fact, one of the things which often caught my interest was how often you'd see a torii in the middle of a thriving business district or residential area at places that you would not expect them. In particular, running across them in areas like Shinjuku or Shibuya always felt like an oasis of spirituality or, at least, old Japanese culture in the midst of all of the modern hubbub.

I know the Japanese aren't especially religious people, but there sure are a lot of torii in their country anyway. I'll miss seeing these gates, and how they were frequent reminders of old Japanese culture.
Posted by Orchid64 at 8:00 AM