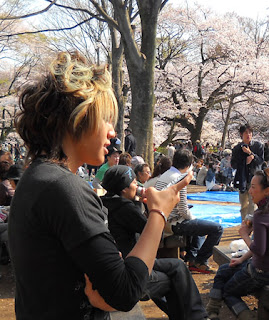 Cherry blossom viewing is soooo boring that one needs to spice things up a bit with the excitement of texting.

When I originally posted this, in the early days of this blog, people told me that this problem existed everywhere in the world, not just Japan. People who mindlessly walked or stood around staring at their cell phones while tuning out the rest of the world weren't only a scourge in Tokyo, but everywhere that technology had made it's way into the greasy mitts of the population. When I returned, this was one of the points that I was particularly curious to observe. People are, after all, just as attached to being electronically tethered to one another here as they are in the land of the rising sun.

After coming home, what I discovered was that people gawk at their cell phones a fair bit here, but pedestrians who stand around in their own little world blocking others as they fully immerse themselves in poking at their cell phone screens are not much of a problem. In Tokyo, the maddening thing was people who were enmeshed with the tiny screen on their phones were omnipresent obstacles to movement because of the narrow spaces and crowds. Here, the problem is much more troubling and scary because the idiots who can't tear themselves away from their phones are often behind the wheels of cars. While it is illegal to use your cell phone with your hands in the U.S. while operating a vehicle, people do it all of the time. I've seen so many people weaving in traffic while using their phones that I'm shocked they're aren't more accidents than there already are and disappointed that the police aren't enforcing the law more vigorously.

I absolutely do not miss the cell phone zombies in Japan, but I'd gladly put up with hordes of them than  deal with the incredibly dangerous behavior I see among cell phone users in their cars in the U.S.
Posted by Orchid64 at 8:00 AM