Will Miss #12 - the kitler at the local liquor store (reflection) 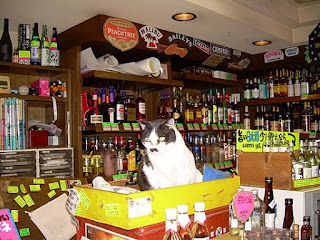 One of the things I infrequently mentioned about returning to life in the U.S. was that I would be looking forward to being in a situation in which we could, in good conscience, have a cat. Though we stayed in Japan for 23 years, we were never sure when we'd leave. Though, had we gotten a cat the minute we arrived, it would have died long before we left, we never planned to stay that long. Also, it would have violated our rental agreement and getting a place that accepted pets was not a trivial matter.

During our time in Japan, we enjoyed cats vicariously, and none so much as the kitler (a cat whose coloring makes it appear to have a mustache like Hitler's/Chaplan's) at the local liquor store. While many neighborhood cats were skittish, this one was docile and easy to access. It was also beautiful.

Now that we're in the U.S., we still don't have a cat even though our apartment permits it. We're still in an unstable situation and don't know where we will move or live in the future so, once more, being responsible means we don't have a pet. We are finding that cats are just as idiosyncratic here as they were in Japan and that it's hard to find a friendly cat that tolerates (let alone welcomes) attention from random strangers who are lonely for feline companionship.

Having a nice cat in one location that you could just go to and pet any time you wanted to was a small treat and something which I still can say I miss about life in Japan.
Posted by Orchid64 at 8:00 AM

Email ThisBlogThis!Share to TwitterShare to FacebookShare to Pinterest
Labels: cats, kitler, will miss