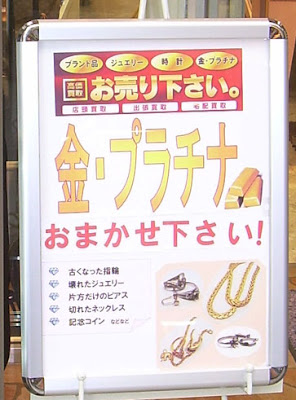 A sign about platinum jewelry.
Among my married students, I have never seen one wear a ring made of gold. Every married person I've ever met in Japan has a platinum wedding band. In fact, Japan buys 85% of the world's platinum jewelry. Considering that they have less than 2% of the world's population, that's some pretty impressive conspicuous consumption. I've never gotten a straight answer as to why they prefer platinum to gold (white or yellow) or silver, but I would wager that it has something to do with its rarity. In essence, I think it's about status and having something which is rare rather than simply the color or luster of the metal.

I won't miss seeing the preoccupation with platinum and the underlying materialism and status seeking which motivate its popularity.
Posted by Orchid64 at 12:15 AM