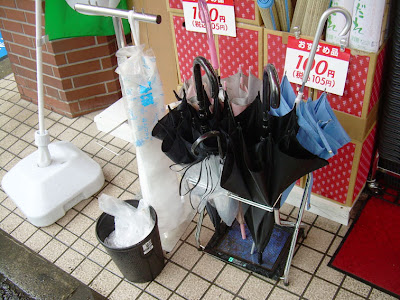 Long, plastic sleeves for wet umbrellas are offered next to the stand.
Umbrellas are everywhere in Tokyo. People frequently forget them on trains and in the holders outside of shops. You can also buy cheap plastic ones for 300-500 yen ($3.22-$5.37) if you are caught unprepared for a downpour. Every year the Tokyo Metro has a sale of unclaimed items that are left on trains and umbrellas make up a large portion of that sale. You'd think that with all of those umbrellas on hand, and the low price of cheap replacements, people wouldn't need to steal them. Nonetheless, I have had my umbrellas stolen on numerous occasions both by strangers and coworkers. When I left one in the stand at work "just in case" it rained, invariably a coworker would just take mine (and sometimes not bring it back at all) and leave me high and so-not-dry. I have gone into convenience stores and markets and left my umbrella in the stand outside to drain and found it has been pilfered when I leave the store and go to retrieve it. If you've ever wondered why (wasteful) plastic sleeves (to holster wet umbrellas) are placed next to umbrella stands, it's because some people refuse to leave their brollies in the stand for fear of them being stolen and the shops don't want the water from them dripping all over the floor in the store. The very presence of these sleeves is an indication that such theft is pervasive enough to require an alternative to leaving your umbrella outside where anyone can steal it.

I won't miss this petty umbrella theft.
Posted by Orchid64 at 12:15 AM