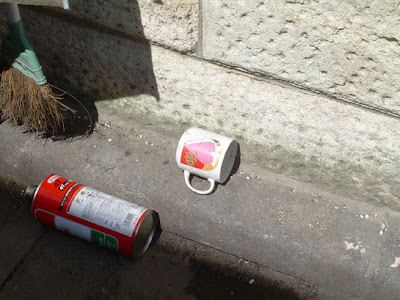 I realize that littering happens everywhere. Of course, in the U.S., this sort of thing carries heavy fines. It supposedly does in Japan, too, but the police don't enforce the law on this point. When I was back home, hucking your trash onto the street would cost you $300 if you were seen. The Japanese are no exception to being litter bugs. As I have said before, they are not as clean as people think. Someone is just always cleaning up after everyone else. The one thing which I have witnessed time and again (as have others) is willful littering. That is when people have the option to throw trash into a bin, but choose to throw it on the ground. Most recently, a young man went into a convenience store, bought something and walked outside where he proceeded to crumple his receipt up and toss it to the ground. He not only ignored the trash can right behind him, but the little cups that are in front of the cash register in that shop where you can put your receipt if you don't want it. After tossing his trash into the street, he went back into the store.

I don't understand the people who seem to willfully bypass every opportunity to throw trash into a proper place so they can litter and I won't miss it.
Posted by Orchid64 at 12:15 AM