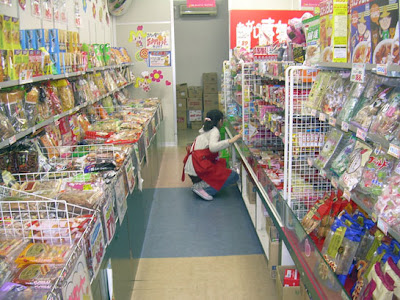 Aisles in shops in Tokyo are narrow, as I've mentioned before. One of the things that seems to happen often when I'm shopping is that an employee (or several employees) will largely or completely block the aisle while you're trying to shop. This happens nearly every day. I can understand that they have a job to do, but more often than not, they won't move when you need to get by or they leave boxes or carts full of goods standing in the aisle for long periods of time taking up whatever space they aren't personally occupying. Incidentally, I'm not implying that employees in America are generally better at getting out of the way (as I don't remember after so many years in Japan if they move when blocking or not), but rather that it isn't as much of an issue because the aisles are much, much wider.

Despite its generally good service, employees don't seem to have the common sense to move when they are blocking customers and I won't miss this.
Posted by Orchid64 at 12:15 AM