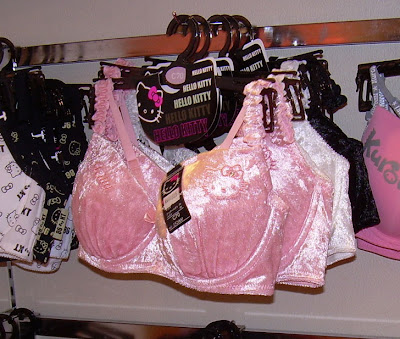 This item should come as no surprise to most people. Given that Japanese women are petite, and not known worldwide for their ample bosoms, it's easy to imagine that getting the right size bra if you are a foreign woman of ample endowment can be difficult. For the record, the average cup size in Japan is "B" and the largest size that is generally available is 90 cm. (35.4 in.). The average in England, as a point of comparison, is "D". That's not to say that there are no Japanese women with a jumbo endowment, but the foundation garment market largely caters to averages, not to people who are a few deviations away from the majority. While it is probably not absolutely impossible to locate a proper bra for a foreign woman who is a "D" cup or "better", it's not exactly trivial. You also have the issue of staff who are a bit strange about dealing with you and your big Western breasts. Frankly, I just order my bras from Land's End in the U.S. because it's so much easier and less hassle. That being said, I'd much rather have the chance to make sure the fit is good because a poorly fitted bra is a recipe for back and shoulder pain.

I won't miss finding it difficult or nearly impossible to get a bra that fits.
Posted by Orchid64 at 12:15 AM