Will Miss #374 - retro signs and artifacts 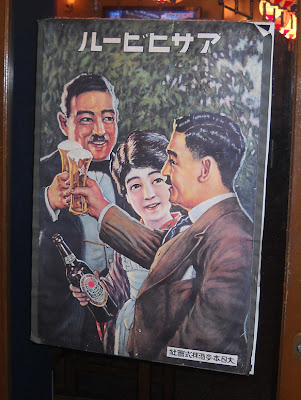 They're either channeling the world's most famous genocidal maniac or Hercules Poirot.

One of my students recently went to France and said that one thing she noticed was that there were a lot of old buildings and reminders of old culture in Paris. She compared this to her home city, Tokyo, which is a place which seems intent on tearing down any structure that is approaching the equivalent of middle age. If buildings were people, I'd be living in the architectural equivalent of Logan's Run. Because Tokyo seems to be living in an era that believes it's better to end than mend, it's uncommon to see artifacts from the past. When I do encounter them, I have a great sense of delight at these throwbacks to Japanese culture from bygone days. Often, what I'm seeing are reproductions of old signs, but occasionally I'll come across a genuine antique (like a wooden Meiji milk box someone hasn't gotten around to ripping out and throwing away and replacing it with one of the sterile plastic ones that are all too common).

I'll miss these rare, beautiful and interesting bits of retro Japanese culture.
Posted by Orchid64 at 8:00 AM