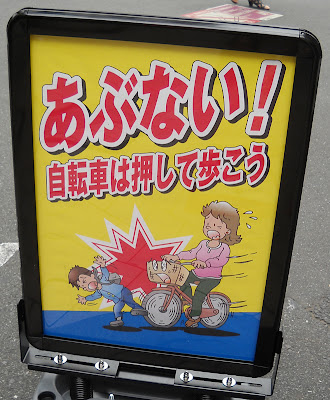 While not being confronted over niggling infractions like taking a photo in a no camera zone is a bonus when living in Japan, the fact that the Japanese are so reluctant to confront people who break rules can be inconvenient and troubling as well. In particular, when someone breaks a rule which affects others strongly and no one with authority calls them on it, it can be very irritating. One case in point which I experience on an almost daily basis are people smoking in no smoking areas or riding bicycles in no cycling areas. Superficially, it appears at times that the police also have a reluctance to confront as I've seen them stand outside their police boxes and watch cars run red lights without blinking an eye. It could be that they're just lazy, but it does seem that they'd rather not get involved if they can possibly avoid it.

I won't miss the way the Japanese won't confront people who flagrantly break rules which endanger or trouble other people.
Posted by Orchid64 at 8:00 AM