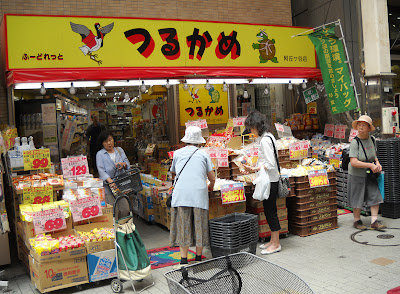 Back home, we used to go to a discount store called "Big Lots". At that time, it was an awesomely awful store that sold strange food (often from developing countries or eastern Europe) near or past its expiration date, fashion that was so utterly unfashionable that those who had any sense of taste wouldn't buy it at any price, and items which were so dubious in their utility or appearance that only my shopaholic mother and others who had to buy at any cost regardless of the value of the purchase would buy them. Since the Japanese tend to be pretty fussy about freshness and quality, you rarely see the equivalent of a Big Lots. The closest I've found is a shop called Tsurukame, a chain of stores which appears to specialize in day-old bakery items and products that are too strange or lacking whatever it takes to catch the discerning consumer's eye. I've found some pretty bizarre items there as well as a few worthwhile bargains.

Walking by this shop on a near daily basis provides an education in consumer tastes as well as a reflection of a certain segment of the Japanese population that is willing to subsist from what is scraped from the bottom of the buyer's barrel provided that there is enough of a bargain price on it, and I'll miss it.
Posted by Orchid64 at 8:00 AM