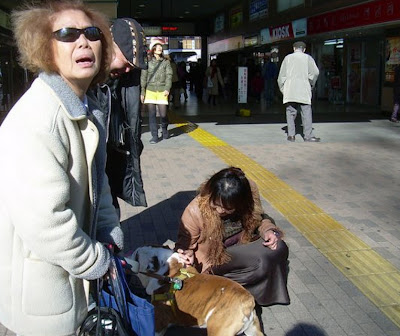 The only animal being treated badly here is the poor master of that stubborn bulldog.

I realize that animal population control is a difficult thing and that cost is a part of the consideration. Sometimes animals have to be euthanized or they will suffer worse fates (life in a tiny cage, starvation, death by disease, etc.). How a country on the whole deals with this problem is a reflection of its values in a particular regard. In Japan, the pounds gas their animals instead of euthanizing them via lethal injection. They also kill cows by injecting them with detergent and tying their legs together. The latter case is despicable. The former is not quite as bad, but animals die in fear and suffer unnecessarily all because these methods are cheaper than more humane ones.

I find the way animal population control is carried out in Japan disgusting and heartless and I won't miss it.
Posted by Orchid64 at 8:00 AM