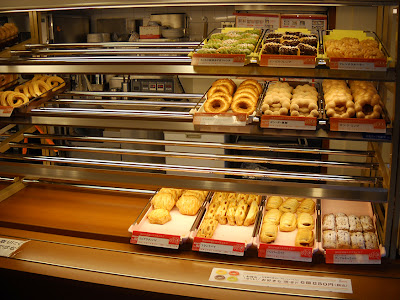 Actual selection at Mister Donut at 9:00 am.

There's a well-known commercial from the 80's in which a man stumbles out of bed at an ungodly hour to go off and make doughnuts so that they are ready for breakfast. In Japan, no one is getting up before the sun shines. In fact, I'm guessing most are sleeping in later than the average commuter salaryman. I'm not a huge doughnut eater, but once or twice a month I like to have one for breakfast and the selection at Mister Donut is appalling during the early hours. An 8:30 walk to the nearest one yields lots of empty shelf space and a paltry selection of what may actually be leftovers from yesterday's doughnuts. What is worst is that my beloved angel cream is rarely around before 9:30 am (and often not until much later).

I realize that this is because Japanese people don't often eat sweets for breakfast and are just as likely to get a hotdog at McDonald's as anything else for their morning repast, but I won't miss having a pathetic selection of doughnuts available when I am in the mood to have one with my morning coffee.
Posted by Orchid64 at 8:00 AM