A diagram of our apartment as it was in 1996. I drew it in some little drawing program made by Apple.

In Baye McNeil's book, "Hi, My Name is Loco and I am a Racist", he talks about his roommates thinking that he's doing something incredibly weird in his room because they detect an unusual odor emanating from it. In the end, they figured out that the aroma was not generated by Baye or anything he has done, but rather by the room itself. Such is the experience of going to a foreign country and not knowing that the smells are different, not only the sights. The experience of being in a Japanese apartment, at least for me, is indelibly linked to the smell of tatami, the odor that Baye's roommates found so oddly offensive.

My husband and I lived in the same apartment for 23 years and I didn't realize how unusual that was until I came home and found that those who do not buy tend to lead a fairly nomadic existence. Rent contracts are short, rates tend to go up when they run out, and people are always in the process of finding the next place, at least in the Bay Area in California. In fact, we are facing a move in the very near future and I am not looking forward to it. 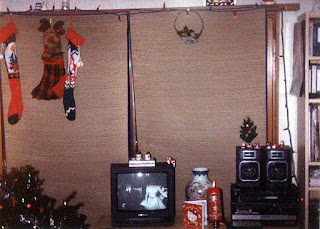 Though we did not move in Japan, our apartment did see many changes over time. I'd grown so used to the place by the time we left, that I had forgotten what it looked like when we started out. For instance, we started off with using Japanese rattan blinds (sudare). We moved on to noren, a covering often used in doorways of restaurants in Japan. Finally, we went for long dark curtains which were later changed over to long beige ones. I had forgotten about these changes until I found some ancient pictures from those times. 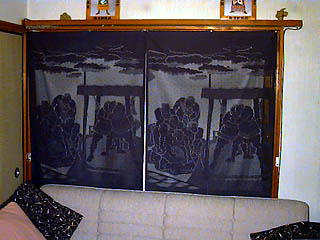 Our apartment wasn't just some place we kept our stuff in and crashed in. It was also a reflection of our proficiency and engagement with the culture during various points in time. We used sudare because they were cheap and close at hand. We didn't know where to find "proper" window treatments and we wanted privacy so we bought them. Later, when we became interested in sumo, we changed to the noren, but I had to put a large amount of white paper (taped together to form a solid cover) behind it in order to get more privacy. 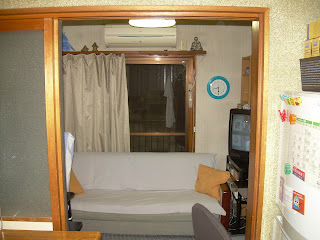 October 2011, about 6 months before we left Japan.

There was also a distinct transition in terms of style and clutter as time went by. In the beginning, we tended to accumulate more eclectic pieces and cute stuff that was near at hand. I worked near Tokyu Hands in Ikebukuro during my first few years and tended to go to their floors with decorative items and pick up things that struck my fancy initially. When we entered our sumo loving phase, we started to buy souvenirs and decorate with those. Finally, this gave way to a cleaner, more simplistic look as I decided that I really would prefer a clearer space.

It wasn't all about making a decision to turn to a more simple way of living as the years went by. Technology was a great facilitator of such a change. The picture at left, which will look a little funky because it's three pictures joined together and they were not taken with that purpose in mind, shows just how much media we kept around in an age when the internet was made up largely of command-line interfaces and text.

We had an enormous shelf full of books, videotapes, CDs (in the drawers on the right), software and DATs (digital audio tapes). The books were largely study materials for learning Japanese, though some were for entertainment. This was before Amazon existed and the main resource for English language books was the over-priced and limited selection at Kinokuniya book shops.

The videos were a collection amassed over a long period of time and had been recorded from American T.V. by my husband's family and mailed over to us by surface mail. Cable T.V. was uncommon and had limited viewing options and YouTube was not even a concept, let alone a potential reality given the bandwidth and coding of the time.

DATs were actually a reflection of the rental CD market in Japan. This was before you could rip a disc on your computer. DATs allowed my husband to rent music he liked and then make higher quality recordings than the standard cassette tapes.

This sort of "warehousing" of media was the only way we had for many years of consuming English-language culture. By the time we'd left, gaining access to English culture was a simple matter of getting online. Over time, all of this ended up, unfortunately, as landfill. We tried to give such things away, but no one wanted them. They'd become anachronisms. Even the CDs had to be trashed and it gave us no pleasure to see things we'd spent a lot of money on go into the trash heap, but time does march on and things become obsolete. 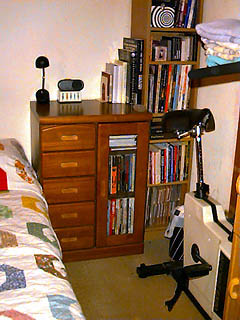 And there were even more shelves with more books and stuff. The bottom shelf, as I recall clearly, is chock full of all of the back issues of "Sumo World" magazine that we had. We loved sumo so much that we bought all of the old issues as well as never missed a new one.

Our stockpiling of "stuff" in this way may see as though it was unusual, particularly in a tiny apartment, but the truth was that I incidentally saw many Japanese people's homes (through their open windows as I walked around the city in summer) which had similar stacks of stuff. In fact, theirs were often piled higher and less organized in appearance. Americans do the same thing, but they tend to have more space to put their crap in so they relegate their junk to attics, garages and closets more often than not. 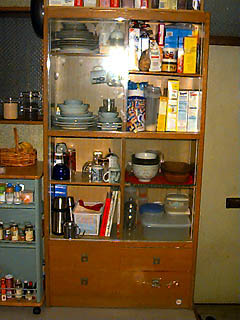 Our old, enormous kitchen shelf with loads of boxes of cereal and imported food (on the top as well as inside). When we found such things, we stockpiled them, because we knew they wouldn't be around forever. This shelf was with us for 21 of our 23 years in Japan. By the time we disposed of it, all of those drawers had broken handles and I'd just thrown them out and used them as 4 other shelves.

Looking back at these pictures, the place really feels like "home", even though Japan itself never felt like home. I can look at these pictures and see little details of items that saw much use, but were forgotten. The little black lamp on my bedside had a crane-like neck that allowed you to collapse it into a little capsule. I remember that eventually the joint go so loose that the lamp wouldn't stay up and that it was originally a bright blue that I did not like so I painted it black. I can see the silver base of a candlestick which my husband gave me for Christmas stored in the drawers next to our media shelf and recall that it was bent accidentally when I stored it under a sofa some years later (the sofa had storage in its base). These types of memories around well-used and cherished objects are part of what builds our concept of "home". 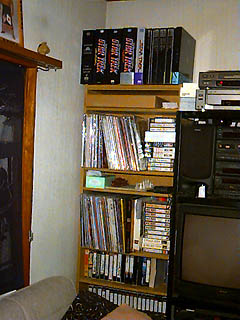 More videos and, yes, laserdiscs! Certainly a reflection of an era...

I made a little space for us in Tokyo which was a bubble against the outside culture, which was often hostile toward me and made me feel objectified when I was in it. The apartment was a haven in which English could be heard and spoken without judgment or consequences. It was the only place in which we didn't feel alien.

Very little of what we had came back with us to America because of the logistics and expense of doing so. Of what you see here, only the blue sumo noren and sumo tournament winner portraits made it across the Pacific with us. We took those things with us not because we couldn't part with our junk, but because they were a piece of the home that we had there for so very long. The hope was that transferring them would help us transfer our sense of security and comfort. I can't say that that hope has been fulfilled, but looking at those items and having them at hand does provide a sense of warmth and fond remembrance.
Posted by Orchid64 at 8:00 AM