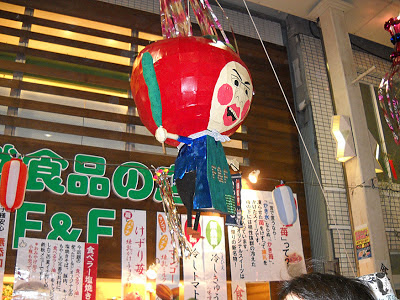 This guy was hanging in front of the organic food shop. See, he's not too happy with it either. ;-)

There was an organic food store near my local station when I lived in Asagaya in Tokyo. You can always tell a shop that sells food untouched by the brutal hand of pesticides by the fact that it has a bunch of brown, wilted, nasty-looking fruit and vegetables whereas all of the other shops have nearly perfect, clean and generally appealing looking produce. I can't say for sure why the organic food I saw in Tokyo always looked as it it had been driven around in the back of a truck on a hot day for a week, but it did. My speculation was that, without the chemicals that are sprayed on produce to keep it looking artificially nice, the long haul from wherever it was grown to the streets of the city was enough to cause it to degrade rather rapidly. Whatever the case, it was always very expensive and looked like it was not too far from heading to a compost heap where its main contribution would be to feed the growth cycle without feeding any people in between.

While I'm not obsessive about organic food, it is better to buy it for some particular types of food and I don't miss the miserable state in which organic food was sold in Tokyo.
Posted by Orchid64 at 8:00 AM